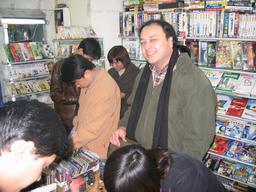 I've been looking slightly askance at everybody I've met since arriving in Urumchi. I don't know if the proper term would be "paranoia," a "romantic nature," or "delusions of grandeur," but I keep wondering which of the people I've met here is the spy.

Why do I figure somebody here must be some sort of Agent XYZ? Well, I'd be genuinely surprised if there wasn't at least one person here solely for information-gathering, given the location. On the map, Xinjiang is part of China. Culturally, it's always been Turkic. A university program would refer to the region as "Central Asia". The Uighur language is probably most similar to those spoken in the former Soviet "'Stans"--it's mutually intelligible with Uzbek. The early part of the 20th century saw the Russians and British setting up consulates in Kashgar, competing to gain a presence in the region (i.e. expand the Raj in India and what was to become the Soviet Union.) In 1943 the area was an independent nation, known as East Turkestan.

Much of the population of what's now known as the "Xinjiang Uighur Autonomous Region" is still not pleased being governed from Beijing. There are uprisings and bombings every now and then, in the name of independence. Shortly after China graciously returned the American "surveillance plane" that was brought down on Hainan Island a couple years ago, the U.S. government officially categorized the East Turkestan Islamic Movement as a terrorist organization. To say the least, it's a sensitive region.

So, just who are some of the dodgy characters I've met?

Ivy League Grad' Students
Within a couple hours of arriving in Urumqi, I was greeted by an American and Australian. One is a Harvard lad, the other of Princeton. We've gotten along and become friends, but their immediate introduction and foreknowledge of my arrival surprised me.

Japanese Girls
I've met at least four Japanese girls in my Uighur classes, and no Japanese guys. Most of them speak fairly decent Chinese as well. Hmm.

Joyce
Yes, the one with whom I stayed for two months in Beijing. However, I met her in Sost, just the other side of the Pakistan border. She'd been traveling around Tajikistan and Afghanistan as well. Well-off enough to afford her own car, computer, and other luxuries. Currently writing a book of her travel experiences.

Korean Missionaries
I was initially befuddled as to why so many Korean students were in my language classes. Wouldn't Beijing be a closer, better place to pick up Chinese? It finally dawned on me how large a percentage of Christians there are in South Korea: Missionaries!

Adila
Cute Uighur student who introduced herself as I was walking back to my dormitory. Spoke in broken English and asked if I would give her lessons. That happens to foreign students all the time. What makes her questionable is that she's the only person to recognize that I'm not from around here. Furthermore, as nobody else has observed that I'm a native speaker of English, how did she do so at nighttime when it was completely dark?

I took Adila's 'phone number but didn't give mine. I never called, but she bumped into me again a week later. We took a stroll, went shopping, then dinner together. Perhaps one of those silhouettes swimming around in the credits of a James Bond flick?

Of course, if any of these people have a different agenda, I'm sure I'll never know. If enough readers mail me, casting their ballot for top spy, I'll post the results in a future entry.