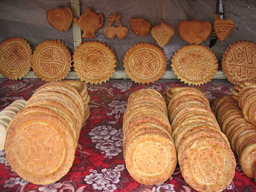 It's 10:00 P.M., and we're at Zero Point again--hopefully for the last time. We're waiting on two trucks to finish loading their cargo, after which we'll embark on the first stretch of GD219, the road to Tibet.

The events of the past couple days have taken us back and forth, literally as well as figuratively.

We met two Polish travelers yesterday, one with long, blond dreadlocks. Despite no local language ability they managed to arrange a lift to Ali for 400 yuan per head, leaving last night. We were excited to hear that somebody had managed to find a truck driver willing to transport foreigners who asked a reasonable price.

Then this morning we received a call from one of them informing us that they'd both been turned back upon reaching the first checkpoint.

Even with Nisagul's native-fluency in Chinese and Uighur, the question of what paperwork is theoretically required has remained our one unclear point. We asked all around town which permits were necessary. The majority of truck drivers we spoke with were afraid to take foreigners, saying that checkpoints down the road would levy fines for doing so. However, all police stations we enquired at claimed a passport alone would be sufficient for foreigners to make the journey: no permit necessary.

Confusingly, the main police station told us that locals (i.e. Nisagul) require a permit to travel to Tibet. We obtained that permit easily in the morning, so thought our paperwork was completed. Then, later hearing the Polish travelers had been sent back, we decided we should make a return visit to the police station, citing this specific new information.

True to the bureaucracy in China, the station was closed more often than it was open. We came back in the afternoon to find the station closed for lunch. To pass the time we showered at Kaghalik's public bathhouse--we hadn't had an opportunity to bathe since our stay in Kashgar. The police station was scheduled to re-open at 4:00 P.M. Beijing time. However, it didn't actually do so until 5:30. To pass the time Tiffany and I jointly finished a crossword puzzle; Nisagul fell asleep while we sat on the bench outside the station.

Citing the dilemma of the travelers who had just been sent back was no help: though the Kaghalik police could issue travel permits to locals, they were genuinely in the dark about regulations for foreigners. ("Just use your passport.") Not knowing what else to do we returned to the truck yards around Zero Point to try to find a lift.

We started at a cement factory, the site where the Polish backpackers found their lift. While we were talking with some of the drivers, a taxi pulled up, from which two more foreigners exited. Michel of Holland and Taichi of Japan had just arrived in Kaghalik, also hoping to travel the Xinjiang/Tibet road. They came at just the right time. While we'd made several trips to Zero Point over the past days, they found us right before we were offered rides in two trucks leaving this very evening. There would be room for all five, leaving in a few hours.

We had just enough time to make it back into town to take dinner (again at the liver-kebab restaurant,) retrieve our bags from Maryamgul's house, then take a cab back out to Zero Point, where we now wait.