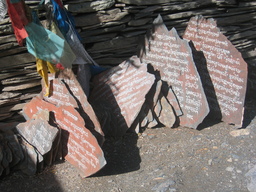 The journey has been so slow. We've gone maybe 360 km in four days. The truck has problems: a tire needed changing, the radiator over-heated. When leaving Kaghalik we were traveling with two vehicles. One truck which was overloaded never caught up with us, so we've been six in the cab: the driver, Tiffany, Nisagul, Michel, Taichi, and I.

We spent last night in this small settlement. To even label it a town or village would be an exaggeration, it's really a collection of a few shops that have sprung up to support this road. We stayed in a basic restaurant which had rooms in the back. The rooms were simple but clean (enough), ever-so much better than that first night we spent sleeping in the truck.

What toilets there have been on this trip, however, are unimaginable. This town's toilet is a pair of outhouses on stilts a short walk behind what buildings line the road. To get there it's necessary to pass the carcasses of several birds, including ravens and a chicken. Rather than the soupy pit I feared in Kaghalik, the waste here piles up above ground. The outhouse has clearly been in service for some time: beneath each slat is a steep peak, nearly reaching the wooden floor itself.

The setting is amazing. Currently the mountains run from sienna to khaki, depending on how the light strikes them. The sky is free from clouds this morning, an even blue in all directions. There's not much plant life up here: scattered scrubby brushes are all I see, though the vegetation varies greatly with the altitude.

Somehow the air too seems unique. I've noticed that every time I've opened a bottle while outside, I hear the whistling sound of air passing over its mouth. It's a faint version of what I used to do as a child, pursing my lips to blow across the top of the bottle, creating a low note. The wind isn't blowing particularly hard, nor do I have to keep the bottle cocked at any certain angle. What's different up here that makes this happen all the time?

We went through a passport check along the road yesterday morning. As the cab was overloaded with passengers Tiffany and I walked ahead of the truck. Our driver told us that this checkpoint was only inspecting foreigners' passports and visas, but not whether they had the required Alien Travel Permit to allow us to travel in Tibet.

We were detained. An English teacher, Tiffany has a work visa. The way work visas are issued in Urumqi the expiry date precedes the date of issue: the actual expiry is keyed to a separate booklet, the work permit. It's an illogical system and inconsistent with the way other areas of China issue documents.

Upon seeing an expiry date long past the local official had us wait. Our passports were scrutinized in a back office. Tiffany fretted aloud that somebody at this checkpoint would contact the authorities in Urumqi. While an official in Urumqi might be able to explain the screwy way they issue visas, they were also aware that she was no longer teaching English and therefore out of status. After an hour and much explanation we were finally allowed to pass.

The trip has been a run of false starts and frequent stops, making it more of an adventure: "Can we cross the next checkpoint? How about entering Tibet proper? Will we make it?"

Last night I tried tuning into different stations on my transistor radio. I figured the Aksai Chin region would be a good place to pick up distant broadcasts. Back when I was a middle-school insomniac I found that AM radio signals travel far at night: from Seattle it was possible to tune into San Francisco (KGO), Los Angeles (KFI), Minneapolis (WCCO), Chicago (WBBM), and Fort Worth (WBAP).

Out here I found nearly a dozen stations, nearly all of them in Hindi. I did pick up an Urdu-language station from somewhere in Pakistan. Borders with both countries are mere miles away. Ironically I couldn't receive anything in Chinese out here.

I've been contemplating how easy this trip is for Taichi and Michel. For both of them traveling this road is a small part of a greater trip. Michel has come overland from Europe, destination Thailand. This is Taichi's first trip outside Japan, he journeyed around much of China, then will head south to Kathmandu.

Me, I'm loaded down with a detailed road atlas for Tibet and a guidebook specifically written for people who want to travel overland to Tibet. I've been staring at maps for years, hoping to finally make it one day. I pondered the difficult points: obtaining a legitimate travel permit, finding a lift, effects of the altitude, buying suitable equipment, et cetera. I realize that I made it out in my mind to be a far bigger thing than it really was. These two guys have just shown up and done it.