Two minutes after we crossed the boundary from Xinjiang into Tibet our truck was stopped by army soldiers. Trying to take a shortcut from the main road they'd driven one of their Jeeps into a bog and were unable to get it out. They wouldn't allow any other traffic to pass. These soldiers demanded that all passing vehicles stop and passengers get out to help them. They didn't have the authority to stop traffic or demand assistance. However, with the military such a dominating presence in rural Tibet we didn't have any choice but to comply. Perhaps we would encounter problems with an army base down the road if we tried to skirt around their illegal roadblock.

One soldier asked us to unload our cargo--mostly lumber--in order to use our truck to pull their jeep from the mud. We didn't follow his suggestion. It was approaching dusk, we knew they surely wouldn't have helped us reload anything, whether or not we were successful. Another truck eventually tried, which was following an idiotic directive. Even before tying it to both vehicles, it was obvious that the cable was too thin. It snapped immediately upon being pulled taut. The soldiers then took the longer of the two pieces and told the driver to try again.

We were up above 5,000 meters, Nisagul and Tiffany were both feeling ill from being at altitude. Tiffany complained of nasusea and the worst headache she'd ever experienced. Even if they hadn't been sick we would have wanted to move along so I tried to find somebody to talk with about leaving. I approached the man who seemed to have the most authority, a soldier wearing a red baseball cap.

He asked where we were from. I told him. Upon finding out that Tai Chi was Japanese he went into a tirade about Japanese people. Strong anti-Japanese sentiment is common around China, especially among younger people. If any rationale is given it's invariably keyed to the Japanese atrocities against China during World War II, known here as The War of Japanese Agression. Such talk seems to usually come from people who were born two to three generations after the war ended and have never actually met a Japanese person. It's frightening how deep the feelings run and how pervasive they are.

I didn't care to listen to the soldier's prejudices but tried to remain polite. I told him that there were two women who were sick in the cab of our truck. My Chinese wasn't up to articulating the full extent of the matter so kept asking him to come over and at least chat with them. I figured if I could get him to the truck, they could both speak Chinese better than I.

It was hopeless. No matter how I tried to change the topic, he wouldn't stop blathering on that all Japanese people are inherently bad. I pointed out that Taichi was 22 years old, and that the war ended 60 years ago. From what I could gather he seemed to believe that at some point before reaching the age of 20 all Japanese people automatically go through some sort of evil character development. 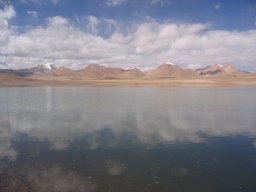 After a long period of nothing happening, Nisagul angrily stumbled out of the truck. Weaving towards us, she approached the soldiers standing next to me and yelled at them: "Hey, if you don't let us move along this won't be a simple issue of soldiers and travelers! It will be a major issue of America-China relations, understand?"

The soldiers scrambled to find our driver; we were on our way in minutes.

I figured it might be of value to other travelers to know where the various checkpoints on this journey are. Below is a list of the points where we encountered some sort crossing gate in the road and official shed asking for papers:

Checkpoints along GD219 between Kaghalik and Ali