Tiffany turned around to head back to Xinjiang this morning. After the Ali Police cut the validity of her visa to 20 days she decided it would be best to not continue on all the way to Lhasa.

Tiffany did come along with Nisagul and me to Mt. Kailash, considered to be the center of the universe to Hindus and Buddhists. After visiting the mountain we spent the night in Darchen, the town along the main road closest to Mt. Kailash. While saying goodbye over breakfast we ran into Michel, the Dutchman we traveled with from Kaghalik. He had already completed his first kora around Mt. Kailash. A kora is a ritual circuit walked clockwise around a holy site. Being the fit Buddhist that he is Michel has decided to circle the mountain an additional four times. The more times, the more merit.

We however, went about the kora all wrong. We asked a local the way to Mt. Kailash, presuming that the trail must be around the base of the mountain itself. Getting there turned out to be a confusing affair. We'd all seen photos of Kailash, so were sure we were heading to the right mountain. However, there weren't any pilgrims, monasteries, litter, or other evidence of a ritual Buddhist kora. After returning from the mountain we learned that the standard circuit which Tibetans follow rings an entire range of mountains, with Kailash at the center.

There is also an inner kora closer to Mt. Kailash which is followed by Hindu pilgrims from India and Nepal. However, it is taboo for Tibetan pilgrims to approach the mountain itself until after having completed the outer kora 13 times.

Back in Ali, before we made the trip to Mt. Kailash, we met Lee, a peppy Australian who had also hitch-hiked from Xinjiang. The four of us wound up sharing a ride out to Mt. Kailash then going on our hapless kora-quest together. She was energetic and talkative, making for good company. On our trek out to the mountain we spent the first night up around 5,400 meters. Lee and I stayed up in my tent chatting and stargazing. The altitude must have had some effect on the night sky, I've never seen anything like it. The entire sky was white, blanketed with stars. I tried searching for constellations, but couldn't find any--the entire sky was so bright with starlight that the more familiar clusters were impossible to discern. There was a long streak that must have been the Milky Way, the only object distinct against a sea of brilliant white.

Upon our return to Darchen (and enlightenment regarding the correct route to perform the kora) Lee stayed on to circle the mountain properly. I would have liked to as well, but Nisagul has limited time to travel. So, the two of us moved on, walking out to GD219 to try to flag down a ride.

At this point she and I have made it just 40 kilometers east of Mt. Kailash. We're in a small town, staying at a clean hotel, trying to find onward transport. Staying along with us is a mysterious older Korean traveler we met while trying to hitch a ride this morning. He's very nice and polite but doesn't speak a word of any language other than Korean.

The three of us got a lift from Darchen in a petrol tanker driven by a Uighur crew. They weren't transporting the fuel to any particular destination. Rather, they would stop off at each small settlement along the way, selling gas by the bucket. They plan to turn around and head back to Xinjiang, selling whatever remains of their cargo en route. That leaves us here, looking for another lift. There isn't much in this little village, though the holy Lake Manosavar lies just on the edge of town. We've been asking around, trying to arrange a lift further east.

To pass time we've been chatting with a girl who runs a small restaurant, one of the two Uighur-owned businesses in this town. She's from Kaghalik, 16 years old, married, and immensely bored. Her husband is back in Xinjiang on business, it's unclear when he'll come back out to Tibet. They moved out here only for the economic opportunity. Their business imports fruits and nuts to sell to locals while serving Uighur food to passing truck drivers from Xinjiang. It's a good business, but must be impossibly dull, living in a remote village with no language skills or connection to the local culture.

We just took dinner with two other travelers also stuck in this town, a couple of Cantonese guys. They're traveling with a large, wooden Chinese chess board. Just before dinner I played a game against one of them. I know the rules of Chinese chess, but lack any sense of strategy. I actually surprised them--and myself--opening with strong moves, quickly capturing an important piece of my opponent's. Once I had their attention they both focused in on the game and beat me badly, though. 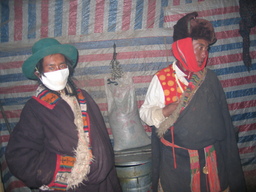 The appearance of the Tibetan people around here is distinctly unique. Some are as fair as the Chinese, though many in this area have a rich brown skin tone. Local women wear bells on their garments, jingling as they walk along. Dresses are ankle-length, incomplete without the addition of a colorful, rectangular apron, sewn together from three sections of striped cloth. Lots of bangles and jewelry are in evidence, men are also elaborately adorned. Everything about the men seems big, from their generally massive frames to the large scabbards most carry. Big chunks of turquoise stone seem to be the earrings of choice for men from Western Tibet. Hair is grown long and braided, usually with strands of red string. Not every man here wears a hat, but most do. The most common choice is a fedora.