Tibetan dogs are not ferocious: they're dumb and lazy.

Before coming to Tibet I had heard all about the wild packs of dogs that roam the plateau. They're everywhere. They're vicious. They'll attack for no reason, and nothing will make them let up.

About the only truth I've found to those rumors is that they are indeed everywhere. Packs of mangy mutts roam the streets of every city, though most seem more interested in sleeping in piles of garbage than engaging in any other activity.

The last town we stayed in, Hou Er Shan, provided a striking example of how lazy the average Tibetan dog is. We stepped out to watch a small convoy of cargo trucks pass through town, hoping one might have room for passengers. Dogs were out in typical Tibetan dog fashion. Dogs were lying between buildings. Dogs were lying along the side of the road. Dogs were lying in the middle of the road. One dog lying in the middle of the road did nothing as the first of the trucks slowly approached. Both Nisagul and I stood in horror, watching as the truck drew near. I was certain the dog would scamper away in time, as the truck was creeping along through the mud and rain.

The dog in fact did nothing until one of the truck's front wheels had run right over its stomach.

Nisagul covered her face with her hands, screamed aloud, then yelled curses at the driver. I wasn't sure which surprised me more: that the dog didn't move to avoid being crushed, or that he didn't immediately die. After being twisted beneath the wheels of the truck he somehow ran out from under the carriage and behind a building. I couldn't understand how any animal would not instinctively run away when being approached by a massive, noisy vehicle. These were the vicious hounds of Tibet?

Along with typifiying the Tibetan dog, that unpleasant event typified our time in Hou Er Shan. The town was miserable in every way possible. Goods were scarce: what could be had was expensive. It seems that in towns around Tibet the men don't bother to go anywhere specific to piss. The side of a building, the middle of the road--it doesn't matter whether anybody is watching or not. Somehow this practice seemed more prevalent in Hou Er Shan.

It frequently rained; a ride out seemed impossible to find. When we arrived there were already two other travelers stuck in Hou Er Shan, looking for anything heading east. Adding Nisagul, the Korean traveler who hitched along with us, and I, the count reached five. Another Chinese backpacker hopped out of a Jeep a day after we came to town, bringing to six the number of people stuck in Nowhere, Tibet.

The increasing number of miserable, stuck travelers became an asset when we finally found an open Jeep--more passengers meant the cost would be divided into smaller fractions. Despite that it was 10:00 P.M. we chartered the Jeep to take us immediately to Saga, a city a day's drive east. The price was exoribitant but nobody cared. We were all willing to pay anything to get out of Hou Er Shan.

My body is acclimating to being at extreme elevations. Most of the Tibetan plateau is above 4,000 meters, with thin air. During the day I occasionally experienced a shortness of breath and giddiness, minor symptoms of altitude sickness. Both Tiffany and Nisagul were hit hard, developing nausea and headaches when our truck crossed a pass at 5,250 meters, I was strangely unaffected.

One unanticipated effect of the altitude is thankfully fading away. The first few nights at elevation I awoke several times each night, gasping for air. It was frightening the first few times, waking up because my body wasn't getting enough air. I recently realized the reason: while asleep my breathing falls into a rhythm. The depth and frequency it automatically settles into is insufficient for the amount of oxygen at this altitude.

Saga isn't that bad of a place, but we're hoping to move on. There is a cheap public bus which makes the run to Tibet's second-largest city, Shigatse. We boarded it just outside where we were staying, the China Post Hotel, at 7:00 A.M. this morning. The bus drove two minutes into the city center, at which point the driver decided there weren't enough passengers to justify a run that day. 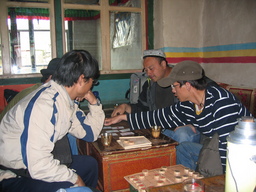 Another Chinese backpacker has joined us so we're now a traveling bloc of seven. From afternoon through evening we passed time together at an old teahouse. Most of the other tables were taken up by groups of young Tibetan women hanging out, playing cards with each other. Wooden tables and benches padded with carpets and cushions lined the walls. The center of the main room was dominated by a cast-iron stove used to boil up water. Both yak butter tea and milk tea were brewed, quite a departure from the plain black and green varieties which would be the standard around the rest of China.

Next to the stove was a slim wooden cylinder, about half my height in length. At first I thought it was a butter churn, there was a skinny pestle sticking out of the top. When I finally paid attention to the women preparing the tea I realized that it was in this long wooden vessel that the tea was steeped, the leaves being mashed with the pestle. I have no guess as to why such an odd object would be used in the preparation process, what advantage it might have over just letting the tea boil in a kettle above the fire.

I hung out for several hours with the others, playing SET and card games, occasionally flipping through The Walrus. I had never heard of The Walrus until just before leaving Urumqi, when I salvaged some magazines about to be thrown away by Bonnie and Matthew. As a proper Englishman, Matthew had several issues of The Economist. As a proper Canadian, Bonnie had several issues of The Walrus. The issues I grabbed from their apartment struck me as a northern version of Harper's, with short stories, satire, and political commentary. It was a relief to find it didn't have that same sense of cynicism which emanates from Harper's, though I found the articles I read were not as well-written or engaging as those found in an average issue of Harper's.

At the teahouse the Chinese travelers in our contingent played game upon game of Chinese Chess; I wasn't up for a repeat trouncing.

We're all staying in one large room with seven beds at the back of our hotel. The older Korean backpacker is still along. Over several days together he's managed to communicate nothing more than his name, age, and that he hopes to make it down to India via Nepal. Though he can't speak a word of English, he is very sweet. Every night he burns a stick of incense when preparing for bed; he occasionally picks up the tab when we all go out for a meal.