I'm liking Lhasa a lot more after a couple days of exploration. No longer surprised by the changes in the city, I've found it rewarding to poke around the Tibetan Quarter.

I'm on my own. I saw Nisagul off at the bus station yesterday afternoon. She embarked on a 26-hour bus journey--the first leg of her journey home. She's presently bound for Dunhuang, a site famous for ancient Buddhist frescoes preserved in nearby caves. Her interest in Buddhism and other cultures was piqued by visits to Tibetan monasteries, especially the Tashilhompo Monastery in Shigatse, and the Jokhang Monastery here at the center of Lhasa. I don't know if she'll actually visit those famous caves, though. The admission charges are steep; Dunhuang was chosen as a destination only because it's the farthest a bus from Lhasa will go toward Urumqi.

I'm going to ask the police for an Alien Travel Permit today. I'm pretty sure that my request to travel to Yadong will be rejected, upon which I'll just spend a few more days exploring Lhasa. I'll likely take the same route as Nisagul back to Urumqi myself, leaving after several days. If so, I hope to stop off and visit the frescoes.

I have to confess that when seeing Nisagul off at the station today I was sorely tempted to pick up a ticket in the opposite direction: the international ticket window at the Lhasa bus station offers a ride straight down to Kathmandu for 580 yuan ($75 U.S.). I'm doing my best to discipline myself. If I head down to the sub-continent, I know that I won't leave for several months. Despite the proximity, I know it's best to make that a separate trip. 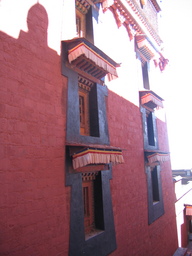 I spent the evening drinking yak-butter tea in a local teahouse. (I used to hate the stuff, now it's my beverage of choice: it must be an acquired taste.) Everybody was surprised to see a non-Tibetan come in and choose a table, but people warmed up quickly. I sat down and penned a few postcards, which got everybody curious. Most of the photos were of Xinjiang, which, despite bordering on Tibet, might as well be another planet in the minds of locals. Everybody started passing the images around; I offered up an English/Tibetan phrasebook. That got the communication going. I spent a fair amount of time with a schoolboy who seemed fascinated that, reading the roman transliteration, I could approximate the same sounds of the words he read out in the Tibetan script.

So, I'm more positive on spending time exploring here than the initial, cynical impressions I had of the city which I related in my last entry. Tibetan culture is alive here in corners and backstreets--even in the central, Chinese downtown. There may be hordes of Chinese migrants and Western tourists--myself included--but it's fascinating to see monks, pilgrims, and locals carrying on unique traditions that originated centuries ago. It seems that on certain streets each pedestrian is spinning a hand-held prayer-wheel. Some pilgrims crawl towards the Jokhang Monastery or Potala Palace. The smell of yak-butter and incense is heavy near those areas.

I hope to spend long enough in Lhasa to update this website with the entries I penned on the way here. I still know very little about Buddhism, Tibetan or otherwise, but hope that my next updates will offer a bit more detail of the personal interactions I've held and what sights I've seen in the monasteries. Developed or not, Lhasa is a unique place.