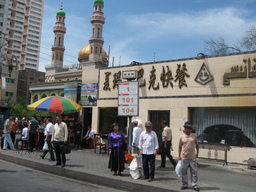 Shamsiya rapped on the door to my room just past midnight. I had heard the apartment door open and shut, but presumed whoever had returned home would go straight to her room. Our rooms are in the back, my roommates and I tend to exchange greetings only if we see each other in the living room by the entrance.

"What!" I bolted up, unsure as to the right words for the situation. "Are you hurt?"

"Yes, here and here," she extended her wrist forward and tilted her head sideways to expose an area around the side of her neck. Both had faint bruises.

Taking the situation in, my alarm started to cool: she was safely back inside the apartment, she wasn't crying, the bruises didn't look severe. "Let me get you some medicine for the pain," I offered. I didn't suspect the bruises hurt Shamsiya that much, but figured she was jarred by whatever had just happened. Concern might be more what she needed. I cut open some travel-sized packets of Tylenol I had picked up recently in Thailand, offering her two pills. I doubted that Tylenol would have any more of an effect than any local medicines I had on hand, but thought the aura of having somebody offer some special, foreign pill might make her feel better.

"So, tell me what happened."

"After getting off work I met up with some friends. I was coming home, waiting on the bus stop at the end of Yan An Lu, just next to the mosque. Then my ex-boyfriend happened by: the one I was seeing several years ago, the one who was going to medical school.

"He was drunk. He started going on about how we had to get back together again, how he had changed, how much he loved me. I told him that I didn't believe him. That's when he hit me. I started to yell at him but he grabbed me by the wrist, trying to force me into a taxi."

I didn't know how to reply. I've seen men hitting women publicly on the streets of Urumqi more than once. There's far more acceptance of such behavior in this area of the world than is common in the west. Even many women in this area will themselves say things like, "If my husband were to hit me I would know it was only because it was my fault. I would have to do my best to improve and correct my mistake."

I'm not going to cite sources, but I know the above to be an accurate quotation of something said by one of the more educated, outgoing, and independent women I know from this area. 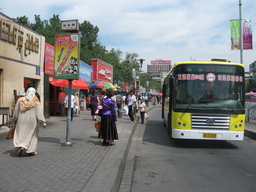 I felt there was nothing I could suggest to Shamsiya: any of the things I would typically have said to a friend in that situation were moot. I wouldn't expect even the most basic tactic--yelling loudly for help--to accomplish much. Passers-by seldom get involved in street fights, whether or not women are involved. Crowds do gather around to watch men beat each other bloody, but nobody intervenes. Suggesting that she call the police for help would be empty advice--even if she managed to give her location and situation to some emergency number, I couldn't imagine an officer being dispatched to the scene. I've never heard of any sort of domestic violence hotline or women's shelter in Urumqi. Even in the west, such places are relatively recent developments--and the attitudes and infrastructure here are decades behind.

I wanted to offer some concrete advice for what to do if she ran into him again. Nothing credible came to mind. Lamely, I told Shamsiya that if there was trouble again she should call me, regardless of the hour: I would come wherever she was. I really would come--who wouldn't, if a friend being attacked called out of desperation? But the improbability of her being able to place a call, let alone of me arriving in time--made me feel like I was making a hollow gesture.

We continued talking, much of it me ranting about other situations I had witnessed or heard about. I finally came up with an idea I thought might get her out of trouble if she were in the same situation again. I pictured the bus stop where she had been: alongside the curb are several shops with stacks of crockery set out for sale.

"What would happen," I asked rhetorically, "if you picked a teapot up from one of those shops, then smashed it onto the pavement? That would change the situation: the people who wouldn't have gotten involved before would suddenly jump in. That shopkeeper is going to want you to pay the 20 yuan for the cost of what you broke. It's going to surprise your ex-boyfriend--he'll probably stop trying to pull you into a taxi. Maybe the police will actually come, which is what you want. That ex-boyfriend isn't going to worry about appearing tough and manly in public anymore--now that it looks like you're crazy, he'll fall into a different role. And if that's not enough to change the situation, break another teapot. Hell, break five of them: I'll spot you the 100 kuai."

I began to feel better, having coming up with tangible advice. I just hope Shamsiya will never have to test whether my suggestion might actually work.

Note: Figuring this was a somewhat personal topic, I first asked Shamsiya if I could write about this event for my weblog before composing this entry. She agreed.