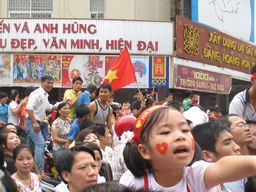 The old quarter of Hanoi is festooned in red and gold. Paper lanterns hang above every other storefront; Vietnamese flags (a single golden star on a red field) are mounted on staffs every few steps in-between. People are decked out in t-shirts and headbands--most with some variation on the phrase "I ♥ Ha Noi"--in either English or Vietnamese. Many people have gone even further with the self-decoration, placing red stickers (in the shape of either a heart or a waving flag) with yellow star at center onto their cheeks or forehead. There's an excited buzz I've never felt before. 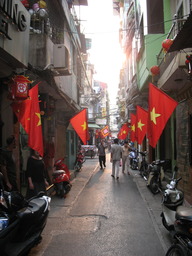 I guess I have no true idea how many zeroes a close estimate would have, but it's obvious: Hanoi has been the place to be today.

The great majority of people here seem to be neither local nor foreign, but appear to have come in from other parts of Vietnam. I see lots of people consulting maps of the city as they walk around the central lake. Another pre-requisite I've noticed to taking part in the bash: eating ice cream? At one point yesterday afternoon I paused and scrutinized to be sure. Yes, out of the dozens of people walking in my direction, every last one was eating an ice cream bar. Were there free samples being given out somewhere?

Cotton candy, balloons, glowing Cyalume toys, and informal sausage-on-a-stick-style street food were all for sale. It's been a great atmosphere. 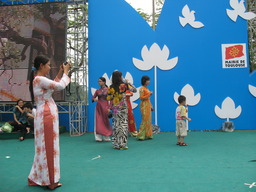 Some people are getting dressed up for the occasion. Groups of women are decked out in ao dais, a long, flowing traditional Vietnamese dress. These aren't uncommon: I've seen them worn in other cities I've passed through. But clearly, some people are putting on their most-colorful, fanciest finest for the occasion.

One happy contingent I encountered working their way around the lake yesterday evening: swarms of people around university age holding up signs offering "free hugs". I guess the free-hug phenomenon has been no exception to globalization, though most countries across Asia strike me as unlikely places for such a touchy-feely movement to take hold. As expected, the group didn't seem to have many takers walking around the lake, despite that many of their signs were bi-lingual. Upon seeing my foreign face at a distance, the free-huggers zeroed in on me. Cheers, smiles and several hugs ensued when I was found to be one of the rare passers-by actually willing to accept their offer. 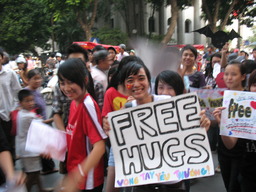 I almost missed being here. First, I was delayed by a day when my train was cancelled. The tracks north of Hue were washed-out. Then, when I finally arrived into Hanoi yesterday morning via sleeper-bus, I found no vacancies anywhere throughout the city center. In all my travels, I've never been in a situation where I arrived into some town and found everywhere fully booked. I realized after asking a dozen hotels that I'd likely need another plan.

I sent a desperate last-minute request to two people on Couchsurfing. Both potential hosts responded fairly quickly, but with unsurprising news: no place to stay. One already had two other guests at his apartment.

I decided that I'd have to leave Hanoi and head on to some other town just to find a place to sleep for the night. I'd had little sleep--and none of it good--on the overnight bus journey in. I was dazed, but figured I'd enjoy what I could of the event before leaving. Even without all the special activity keyed to the 1,000th anniversary events throughout the city, I was entranced and intrigued by Hanoi. The narrow alleys of the old quarter were sensory, winding, and alive. As I made my way through different corners of the old quarter, I'd stop at every hotel I came across. Each delivered the same response when I asked about a bed for the night: 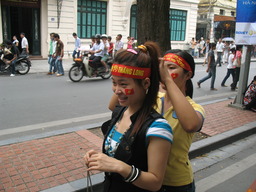 In the end, I finally did find a place to stay. The initial response was the same, but the woman working at reception must have decided to take pity on me.

"Well. There is one room. No air-con: just a fan. You won't have a bathroom of your own. You'll have to come down to the ground floor for that. $10 USD a night." 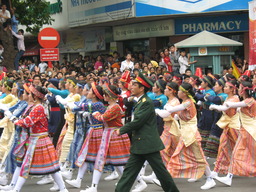 I'd already been told "no vacancy" by at least 20 other hotels, including the sketchiest of backpacker dormitories. Any bed at all sounded not just reasonable, but miraculous.

"Okay. I'll take it," I said, not believing my luck. I had already resigned myself to getting some bus out of Hanoi and missing all the festivities.

I'm so glad I managed to find a place to stay. This has been one phenomenal party.