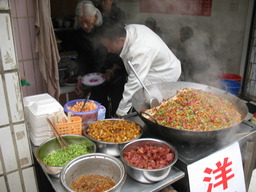 Even after a year away, everything feels so familiar being back in China:

In the days I've been back in China, I've been staying with good friend and former Xinjiang University classmate, Logan. She moved from Urumqi to Kunming a couple years ago and enrolled at one of the local universities, continuing to study language.

However, since leaving Urumqi Logan hasn't studyed Uyghur. In recent terms she's dropped the Chinese as well. She's now studying French, which is adequate to retain status in the country on a student visa. She's also taking on part-time work at a local NGO.

Logan is now living with her boyfriend, Olivier. He was away when I last came through Kunming, so I'm happy to have finally met him. Most of our time together has seen the three of us playing various board games. I have my stand-bys, but they've introduced me to half-a-dozen of their favorites that I could easily adopt into my standard repertoire. Most games involved strategy around a travel-based theme: Ticket to Ride used trains, Caribbean used pirate ships, and Catan... Catan used everything.

Over two consecutive days we went to the Game Place, a bar opened by French ex-patriates stocked with scores of western board games. It was so good to take a couple days catching up with Logan and geting to know Olivier. There was no better way to relax after several weeks in travel-mode than sitting around laughing and plotting strategy over various gameboards.

Thanks for hosting, Logan and Olivier! Perhaps we'll next rendezvous in Quebec?