"Remember that woman you met at my apartment over lunch the other day? You do realize that she's not an ordinary person, don't you?", Meenday asked me.

I vaguely recalled meeting her. She was the young relative of some fellow Mongolian friend of Meenday. She had been visiting Urumqi for a couple days, staying with Meenday. I dropped in for lunch on one of those days. But, that afternoon had left little impression. I wouldn't have recalled that encounter at-all had Meenday not specifically mentioned her. Not only did she seem ordinary, she seemed typical of college-aged girls in China. Less adult and more child, still choosing fashion accoutrements that included small, fuzzy stuffed animals.

"It started when she was 12 years old. She began acting out: behaving in all manner of crazy ways. So, her parents took her to a hospital. The doctor there said that her problem wasn't physical. He said that she should be sent to a mental institution. But, rather than follow the doctor's advice her parents turned to their religion: Tibetan Buddhism. They brought her out to Kumbum Monastery.

"At the monastery they consulted with a lama. He explained that their daughter was no ordinary being, but a 'shen'... "

I interrupted Meenday at this point to look up the definition of shen, the one word I couldn't understand yet far in the conversation. Context probably would have given me the meaning had I let Meenday continue. My dictionary listed out:

"Ah. I understand. Keep on talking," I said after reading through the list of definitions. Meenday continued:

"After they returned from Kumbum Monastery, her behavior reverted to that of any ordinary child. But she retained additional abilities. Five years later she still has a kind of insight. She can sense important, hidden details. She knows of events and how they will occur before they actually happen."

That explained certain behavior when we ate lunch at Meenday's home a few days prior, actions I hadn't paid much regard at the time. We were taking our meal (broad Mongolian noodles and mutton hocks) at Meenday's apartment along with a couple other friends and relations. It came out over the course of conversation that the girl Meenday was describing was presently enrolled in college, studying traditional Chinese medicine.

At two points while we were eating, the young student pressed her hands up against me for sustained periods. The first time, she reached over and gripped my forearm. At a latter point in the meal she stood behind me and pressed her hand flat up against the vertex of my spine.

"Does this hurt?" she asked, slowly driving her palm more and more forcefully into the base of my neck as everybody else around the table watched.

"Honestly, no." I replied. She continued to bear in gradually. I felt tempted to add that I would ask for far more pressure when receiving a body massage than the level she was currently applying. But, I held my tongue, wondering if making that comparison might somehow come across as crass.

She released her hand suddenly. "You'll live until at least 80," she said with a smile, then sat back down and returned to her noodles.

At the time I had presumed that she had arrived at her diagnosis based on her studies. Now, I assume that insight came from elsewhere. 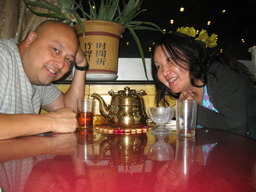 Continuing our conversation, I tried to depict moments when I've experienced deja vu to Meenday:

"There are times when something will happen, something I'm certain I've experienced before. There are also times when I recall a dream I had years ago or even back in childhood. Then, that exact scenario plays out in real life. Some of those times I feel certain I know which words somebody is about to say or how some small event will occur split-seconds before it happens, drawing from some dream I had long ago... "

Meenday's gaze was fixed on me with wide-open eyes.

"But, in my case anything I've seen before in dreams, these events that do play out down to the last detail... they're all really stupid things. Things like me brushing my teeth in a particular setting or having some idle conversation with my sister. It's never been anything significant or meaningful. I can't pick stocks. I can't tell you who the next president will be," I said.

Meenday glanced down to scoop up another spoonful of yoghurt from the bowl we were sharing. Before bringing the spoon up to her mouth, Meenday responded: