Down the KKH II 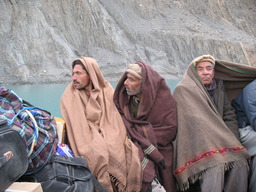 I hadn't noticed how choppy the waters were until a woman seated alongside me began screaming out:

Ordinarily, traveling along the Karakorum Highway wouldn't involve a ride in anything without wheels. But, since floods swept across Pakistan at the beginning of this year, it's been necessary to go by boat for about two hours of the trip. The Hunza River, which used to merely parallel the road, became so swollen that it first flooded the roadway then continued to pool up into a massive lake. The entire village of Attabad was washed away.

The woman who had been seated nearby started rolling about in front of me on the wooden planks in the middle of the boat. Her paisley kerchief was coming undone, slipping off from her head. Writhing on the planks, she continued to scream out. Several people tried to soothe her but met with little success. The man who had been sitting between me and her, who I assumed to be her husband, said a few words but nothing could calm her down. 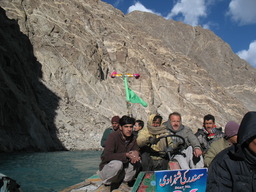 Although this woman was the only person screaming, everybody aboard had become tense. The small craft was pitching back and forth. At first the movements weren't extreme, but then spray began spattering passengers on either side as the boat swayed from one side to the other. The man who had been seated between me and the screaming woman grabbed my knee (unconsciously, I think) and squeezed tight.

Rather than continuing to cut down the center of the lake, the navigator steered the boat to follow the shoreline. Closer to shore, the pitching lessened. That got the woman to finally stop screaming. But, I wasn't much relieved. There was no coast to speak of. The water met sheer, stony mountains. If the boat did capsize, there would be nowhere to climb ashore. I was afraid that now we were passing over such shallow waters along the shoreline there was a greater chance the boat might snag against some sharp rock below. I contemplated what I could hold onto if there was a problem. My passport was in my coat pocket. Anything in my bags would probably just weigh me down and have to be jettisoned. 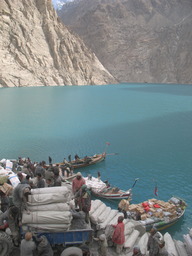 Eventually, after two hours afloat, a welcome sight off in the distance came into view. Other boats were moored; we were approaching the southern end of the lake. I let out a huge breath I hadn't realized I was holding inside. Our boat docked. Without ceremony, everbody disembarked and climbed up over the hill to the continuing stretch of the Karakorum Highway.

I joined a group of men who were negotiating for a lift onward to the city of Gilgit. I got off mid-way, at the juncture to Karimabad, then walked up the road to the small village in the Hunza Valley.

The place I usually stay when in Karimabad, the Old Hunza Inn, appeared to be closed for the season. I decided that the trying morning journey justified splurging a little. I checked myself into a newly opened hotel, Al-Baraakat and ordered a big lunch.

Tomorrow afternoon I continue along down the KKH. It should be entirely a road journey from here on. Next stop, Gilgit.