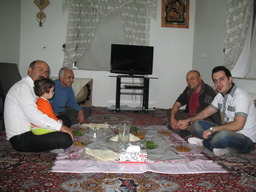 On the bus ride from Tabriz to the border town the couple seated across the aisle struck up a conversation. They were in their late twenties. He prided himself on having been a champion bodybuilder just one year previously--but was also proud of his current profession as a photographer. She had perfect teeth and just the right amount of makeup. He was Azeri. She was Kurdish. We found Farsi the best lingua franca.

They invited me back to her family's home for dinner and to stay the night, though I eventually declined the latter offer. I unexpectedly found myself in the huge home of a Kurdish family with lots of children running about. Eleven people lived together under one roof. It was a beautiful home with high-quality Persian carpets laid throughout.

I took dinner together with the patriarch, his brother, and Hamid--the body-builder turned photographer. Several courses of traditional Kurdish food were profferred: lentil-vegetable soup, rice, roasted chicken breasts--I ate them all up.

After dinner we drank tea and chatted. Hamid was the only other person with any English ability so for more than half the time I attempted Farsi to include everybody in the conversation. What I could say was limited, but enough to express myself. Mostly. At one funny point I was attempting to tell the head of the family that his home was khayli ziba "very beautiful". But what I said was that his home was khayli zira "very cumin". 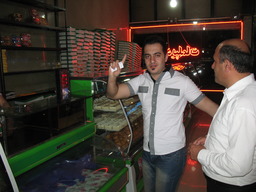 The family again offered me a place to stay for the night. But they also seemed equally happy to drive me into the city when I suggested that I shouldn't trouble them and just find a guesthouse. (I would have stayed had they been a little more insistent.) They drove me into town and helped me to find a sweet shop where I bought an enormous box of pastries to bring to my CouchSurfing host, tomorrow. I haven't been connecting with people through CouchSurfing much along this trip, but have lined up a stay with an English teacher just the other side of the border.

It's just past midnight. I'll cross out of Iran whenever I wake up. What a wonderful final night in the country, a perfect conclusion to this leg traveling through Iran.