There were far more fellow tourists exploring up atop than there were over my first stroll around Diyarbakir's ancient walls several years ago. Maybe the increased numbers are just on-account of timing. That first visit I made to Diyarbakir was at the beginning of winter. This present visit has come a month into spring. Maybe better weather is all that was needed to bring lots more camera-toting people to the top of the citadel. 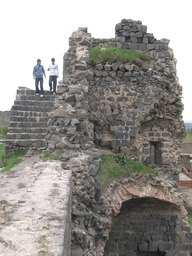 Whatever the case, I'm happy to spend hours hopping around old rocks, simultaneously exploring a relic from thousands of years ago while taking in a bird's-eye view of the city.

I'm already on my way out of Diyarbakir. I'm at the bus station now. I've booked a ticket to another historic city west of here, Şanliurfa. I'm pausing there mainly as it's the next city down the road which is near a crossing point on the Syrian border. I will likely linger. 'Urfa sounds like an interesting place in and of its own right, steeped with architecture, bazaars, and a traditional way of life.

If I am refused at that next border crossing as well, there is one more possibility for me to travel on overland to Syria. There's a consulate in another city a little farther west, Gaziantep. Theoretically, I don't need to apply for a visa. I should qualify for a visa on arrival at any of the borders. But, with political tensions--if not an outright revolution--occuring throughout the country now, I wouldn't be surprised if I'm flat-out denied entry, even with a visa in my passport.

I'm formulating an alternate plan if I can't make into Syria on this trip. I'll backtrack to the northeast, exiting Turkey to visit Georgia. From there, I'll instead visit a "country" that doesn't exist: Abkhazia.

Whichever place I wind up entering in the next few days--Syria or Abkhazia--it will be a country new to me.