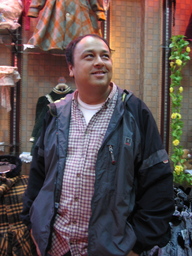 November seems to be everything-goes-wrong month. Getting kicked out of my apartment was the opener. Then last night my iPod died: there's something physically wrong with its hard drive. Worse still, I've spent the past couple days trying to sort out another of those senseless mei banfa situations, where time, money, and logic are all thrown to the wind.

This time the dispute is over an air ticket. I managed to book a flight to Beijing for that great fare I wrote about in my last entry. It was so steeply discounted I couldn't believe I was able to actually buy it.

Right after paying at the local Hainan Airways office, the ticket agent asked me a confusing question: "So, when is it you're going to Beijing?"

I'd just paid for a ticket to Beijing, so it seemed a silly thing to ask.

It turned out that I had just paid for a ticket from Beijing to Urumqi, rather than a ticket from Urumqi to Beijing. Once it had been issued they refused to change the itinerary or to refund my money, despite that the ticket was printed three minutes prior.

I was positive that it wasn't my mistake. I had made the booking by phone the previous night, but there couldn't have been any mistake in language. Being such a crazy fare full of restrictions and no promise of a fixed departure date, I asked Nisagul to make the booking: I didn't want to get any of the details wrong.

I was listening in as Nisagul made the call. I would have caught the mistake had she been the one to make it: it must have been the telephone booking agent who had confused the origin and destination. When I came into the local ticket office to pay, they asked me if it was a flight from Beijing to Urumqi, I corrected them. Additionally, the travel agency had a huge paper log where I wrote the details of what I wanted before buying the ticket. However, pointing out their complicities in passing along the error immediately escalated tensions. "A ticket agent could never make such a mistake!" was the response I got to merely suggesting that perhaps it wasn't we who had erred.

It didn't matter who was right. Having recently learned from similar maddening encounters in Kashgar and with my last apartment's management office, I tried a different tack. I told the ticket agents that I wasn't blaming them, the telephone operators in Beijing, or myself for that matter. My simple question: "What could be done?"

My past experience has been that this usually doesn't accomplish much either. Employees really are bound by rigid rules that allow for no discretion. If they admit to an error, they'd get into a lot of trouble. The system is inflexible, so little mistakes can wind up costing others heavily. However, I think I played it right this time. Avoiding accusations (even those justly leveled) meant they were willing to look at different approaches.

"The flakiness of the low fare might be an asset," one ticket agent suggested. "If we never confirm a date, the ticket won't be issued. You'd get a full refund after one week."

"Hmm... can you put a note to the effect of, 'Don't, don't, don't, don't ever issue this ticket!' into the reservation on the computer?" I asked with a newly forming sense of hope.

The phone rang. She answered... I didn't need any explanation when I overheard, "Oh God. Just issued now..."

At that point I thought I would be out the full cost of the ticket. Then, the unexpected happened.

"You know, there is a provision..." started one of the ticket agents, all three of whom were now fully cooperating with me.

"Passengers who take ill and have a doctor's note... you wouldn't be able to come back tomorrow morning with a medical chart bearing your name as it appears on this ticket? And receipts for 50 yuan or so worth of medication, would you?"

"What a coincidence," I said, hacking into my hand. "I am so sick these days. And that's a full refund, right?"

"That's right... no penalty for a medical emergency, of course," replied the ticket agent I had initally perceived to be the one most resistant to any sort of solution.

Nisagul and I visit the doctor this morning. She's overdue for another X-ray of her fractured wrist, I'm overdue for a ticket out of here.