Upon moving to Xinjiang in the spring of 2004 I shared descriptions of broken English I encountered around Urumqi. I speculated that perhaps time would improve the level of English seen on food packaging, T-shirts, and other products. I'm happy to report that, two-and-a-half years later, the state of the English language in China is as bad as ever. 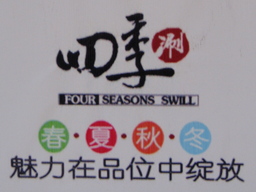 Chinese cuisine sees a lot of regional variety. Common dishes and ingredients of one area are often unknown in other parts of the country. For example, the Chinese food which Americans are most familiar with, (e.g. dim sum), is usually Cantonese. I can't find dim sum or other Cantonese food anywhere out here in Xinjiang. However, hotpot--most commonly associated with Szechwan province--is a dish that seems to be available all across the country.

Eating hotpot is yummy and a lot of fun. Each table has a hollowed-out surface to accommodate a metal basin. A basic gas stove connected underneath the tabletop keeps the pot boiling. Inside the basin is a strong broth, either spicy or savory. Raw vegetables and uncooked meat are ordered from a menu, after the food has been brought to the table the cooking process is completely self-service. Tongs and ladles allow the diner to boil up fish, tofu, mushrooms--whichever ingredients--for as long as desired, then extract, dip into sauce, and eat.

While walking down the street one day, I passed a hotpot restaurant. It looked new and a bit expensive, with large colorful banners lining the windows. The Chinese name of the restaurant was 四季涮, which is a little difficult to translate. The first two characters are easy: sì jì translates as The Four Seasons. The final character, shuàn is a verb that doesn't have a neat equivalent in English. The basic meaning can be "to rinse", though my dictionary has the second definition of, "to cook thin slices of meat by dipping them in boiling water".

Somehow, whoever gave the restaurant its English title named it Four Seasons Swill.

Clothes-shopping in China is difficult for many westerners, myself included. Sizes here are generally small, there's little common ground in terms of fashion style. I find nonsensical English on a shirt a plus, though most T-shirts bearing weird English seem cut to fit tiny Chinese girls.

I was excited while shopping a couple months ago when I came across a batch of shirts that seemed to meet my requirements: large size, weird English, cheap price.

At center of the shirt was a huge smiley-face, surrounded by English:

Laughter rushes into much worid!

THE ROOM OF THE NEXT DOOR UF A HOTEL

After buying the shirt and trying it on at home, I realized it would be too tight to wear. I gave the shirt to Shamsiya, who models it in the photograph to the right. I'm still searching for an English-language T-shirt that will fit me. In particular, I've been looking for a shirt I've seen various women wearing around town. That one simply says, "FAT SLAGS". 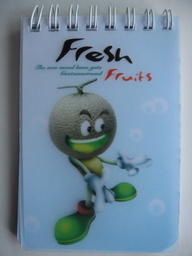 When buying two of the items I described in my original Pandemic Cookie entry, I hadn't realized that they were parts of greater product lines. The little spiral notebook I bought shortly after arriving in Urumqi turned out to be part of a line of Fresh Fruits stationery, each product with abominable English:

The new mood have gots
Gootomorrow

And since buying my initial package of faux Oreos I've found that knock-off Oreos abound in this country. I've now seen no less than a dozen imitators. Most mimic the blue packaging with the red triangle trademark fairly well, picking similar sounds for both Chinese and English names.

My most recent foray into counterfeit Oreos was with the Olio brand, manufactured by some unknown company: Zhu Zhou. Olio declares itself to be Occident Favorite Cookie. Along with all other imitators, Olio tastes bland and flavorless. Most shops do carry bona fide Oreos right next to the phonies. Other than for the novelty of the fractured English, it's worth it to pay twice as much for the genuine article. 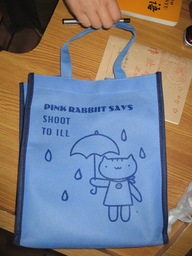 Over my previous term at Xinjiang University I had a crotchety old instructor who taught reading and listening comprehension classes. She tended to veer off on long tangents about her personal life, Chinese history--whatever she felt like rambling about. While unrelated to the course content, I suppose her digressions weren't necessarily a bad habit for our listening comprehension.

One day each week she would bring a small tape deck to play recordings of exercises. She brought both cassettes and player from her campus apartment inside a small, blue bag. This bag displayed a drawing of a cat holding an umbrella in the rain. Despite that the bag and all text on it was blue, the accompanying description declared:

Our teacher spoke not one word of English, so was a bit surprised the day I brought my camera to photograph her tote bag. Tiffany and I tried to explain, but fell short. I'm sure that even if we had total fluency in Chinese, there would be no way to properly translate the text, or convey why I found the bag so special. 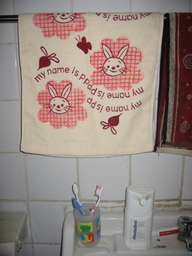 Curiously, while my teacher's bag inaccurately described a non-existent pink rabbit, that's exactly what was depicted on a hand towel I bought yesterday.

I was initially attracted to a supermarket display of towels by the low price. After scanning through the selection, I knew the lone towel with a printed pattern was the one I would have to buy.

A rabbit's head nestled amongst butterflies and turnips was printed over and over. Separating the repeated images was one sentence introducing the rabbit. Running backwards and forwards, the rabbit declared: