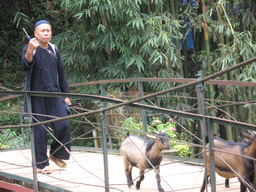 It had been a full seven years since Nicole and I last met up. We managed to catch up, of all places, here: up in the tribal mountainous areas of Vietnam's northwest, where the Hmong people live.

There was lots to talk about, not just because it had been so long ago we'd last seen each other. She's been up to lots of interesting things since we last met. (Which was back when I was passing through San Francisco at the end of 2003.) Most recently, Nicole just finished spending over a year working on a farm on a small island in New Zealand. She's now come to Vietnam with an eye as to whether this will be the next place she lives. Perhaps she might find work with an NGO. Alternately, perhaps she'll decide Vietnam isn't the right place to settle and return to the U.S. to live there, again. But, she--out of all people--could latch onto opportunities in this country that few others could. Though Nicole was born and raised in the U.S., she's fluent in Vietnamese.

We'd been bouncing messages back and forth as I worked my way north up through Vietnam. Maybe meet somewhere down in the south? No, too far to go for a short excursion; she already had a trip to the south planned several weeks later. Maybe meet in Hanoi, then? No, I couldn't make it up there in time. As she'd already been in Hanoi for several weeks already, those crowds flooding in for the 1,000th anniversary celebration that I found so engaging--she found them a compelling reason to get out of town for awhile. 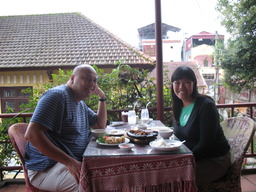 We finally managed to catch each other and spend a day together. She's been up here in the mountain areas for several days, now. I arrived yesterday morning by overnight train from Hanoi. Our initial plan had been to rent motorbikes to drive around the hills together. But, heavy morning and afternoon rains nixed that idea.

So, we instead wandered about the village of Sapa, dodging raindrops and catching each other up on what we've been doing. Conversation always seems to flow over food. We had no shortage of either, chatting over noodle soup at one place for breakfast, coffee and pastries at another for lunch, then an early supper before Nicole had to head off to the next city to catch a train back to Hanoi.

I think what so struck me about our talks was how I was in such a similar juncture when we last met. That was when I was about to settle into life in Xinjiang, looking for a particular experience (studying two styles of calligraphy) but also largely open to whatever might come, and with no firm timeline to move along. I see parallels in Nicole's situation.

As it's been the case each time we've met yet far, I wonder if the next time Nicole and I meet (hopefully, not as long as after another seven years) one or both of us will necessarily be on the cusp of some trans-continental move. 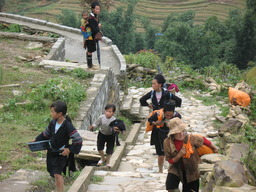 After supper, Nicole began the journey back to Hanoi. I stayed on for an additional day. I made the easiest of treks through the hills, walking down into the valley of a nearby village, "Cat-Cat". Despite its relative proximity to Sapa, Cat-Cat has remained an area alive in the local Hmong tradition distinct from the rest of the country. Everything about the people: their language, their clothing, their traditions--are not only unrelated to Vietnamese, but still rooted in an agrarian lifestyle.

Walking a loop down through the village was about as opposite an experience possible to the mad festivities in Hanoi I had just come from. On my way down, I crossed paths with water buffalo being herded uphill by women wearing handmade clothing of a style I'd never seen. I paused at a point just outside the village--next to an enormous waterfall--where Hmong catering to tourists had signs offering up local specialties. I tried a glass of "medicinal wine" which I expected to taste bitter. When I found it was sweet and fruity, I ordered another glass, just to be sure they hadn't mistakenly given me the other wine listed, made from apples.

This area has been a polar contrast to the rest of what I saw of Vietnam: mostly cities. I'm glad I got something of a different taste before moving along. Sapa will be my last stop in Vietnam. This area is far closer to the borders with Laos and China than to Hanoi, my last stop.