I've been lucky with the weather along this journey. Not only has it been unseasonably warm, there hasn't been much ice on the roads. That surprised me. In October of 2003 when Michael and I came up this same road icy conditions caused our Jeep to skid and spin out, sliding into a mountainside. It certainly is cold enough up here at this altitude for ice to form: the river running beneath the road was frozen over. I guess there just hasn't been much precipitation, recently.

The Khunjerab Pass has to be one of the more scenic border crossings out of China. The road running through the pass, the Karakorum Highway, is a narrow track cutting between some of the world's highest mountains: sheer stone cliffs looming to one side, a river flowing far, far beneath.

I felt a surge of excitement after crossing over the pass and stepping through the Pakistani immigration post. Everything here feels so different from China. At the first place I stopped upon entering the country, First Microfinance Bank Ltd., I was invited to sit and warm myself beside a charcoal-fired stove. Then I was offered a cup of hot milk tea. I had stopped in just to see if they would exchange some U.S. dollars for Pakistani rupees. But, the bank didn't deal in foreign currency. No matter. The employees did me a favor by finding somebody who would exchange my dollars, anyway--and at a fair rate.

I sat and sipped my milk tea while talking with one bank employee, Saeed, mostly about different languages spoken in the area. It turned out his mother tongue was Burushaski--a language completely different from any I'm familiar with. He told me that people here around the little border town of Sost are divided between speakers of Burushaski and Wakhi. I don't know either of those languages, but everybody I've spoken with here seems happy to carry on in whatever I attempt. That's usually Urdu, smatterings of which are still in my head somewhere. What ability I have tends to come out in fits and bursts (or more often Uyghur). No matter. Everybody here can also speak English for the times my Urdu comes up short. 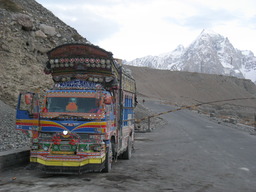 I had been hoping to press along down to the Hunza Valley after crossing the border. That won't be possible tonight. I can't go any farther because of a "lake" down the road. I believe it was created by flooding earlier this year. I can evidently go only as far as "Husseini", then will have to take a boat to the other side of this new body of water, then get another vehicle to continue along down the road.

Being back here for the first time in three years I'm noticing details I'd forgotten: Doors here seldom have a keyhole but are kept locked by two sliding bolts, one on the inside, one on the outside. Men around Pakistan wear the most beautiful shawls trimmed with colorful embroidered patterns. The azan is ringing out from somewhere not far away. I guess that means it's dusk, though my watch says it's much later than it actually is, well after 8:00 P.M.

Which reminds me that I need to wind my watch back by three hours: the difference between China time and Pakistan time.