It took me a split-second to parse each letter and number after they were called. I didn't always have time enough to locate every corresponding square across all nine playing sheets and stamp them off with my fat dauber before the next number was called out. Though I didn't win any prize at the end of the night I did have fun. It was certainly a great exercise to increase my ability recognizing numbers in French.

Calling each ball out in French doesn't change any of the markings of the bingo cards. Those looked identical to what I remembered from times I'd played in English: columns of 5 numbers beneath the letters B-I-N-G-O on each playing square.

When I moved across town a few weeks ago I moved just up the road from an enormous bingo parlor located along the same street as Annie's apartment. It was the local landmark, well-known enough throughout Québec City that it was usually sufficient to just name the bingo hall when giving directions to her apartment. I thought little of the place until passing it while walking back from the bus stop the other afternoon. I had been pondering what to do after dinner that evening:

Finish up the last in the series of mystery novels I was reading? No hurry. Go for a bike ride along the trail hugging the river? Did that each of the previous two days. Go out for another yet performance of the Cirque du Soleil? Another time. Homework? That could wait until later on in the weekend. As I walked up Avenue Rousseau I found the answer I sought spelt out in large letters on a glass door:

I am not a bingo player. It had been, in fact, nearly 20 years since I last played the game for money or prizes. But... why not?

When Annie returned home later that evening I invited her along:

"You know that big bingo hall down the street?"

"Of course. The parking lot is absolutely packed on the weekend," she said.

"I have been curious about what it looks like inside. Sure, we could go tomorrow night?"

Annie was clearly even less a bingo player than I was. Still, we were both up for trying something different so took a look at the website. I could understand most of the French but paused to comprehend one rule:

"Jetons? Jetons... ", I thought to myself. I knew I'd heard the word somewhere before. Wasn't that the word for a subway token? Moments later I made the connection.

"Oh, we can't cover the card with plastic chips. We'll have to bring big markers to cross the numbers off. You don't happen to have any... Of course, you don't. I'll go to Dollarama down on the corner tomorrow to pick us up a couple to play with."

When our soiree of bingo began the next evening we were absolutely hopeless--which I found absolutely hysterical. We started playing along to one game an hour early, marking off our sheets to the numbers being called out without realizing that an additional intermediate session (to which we had not bought in) was in progress. "Stop translating!" Annie demanded me at one point when she could hear me muttering out the English equivalents of the numbers being called as I searched to see where they were on my playing sheets.

In our second round Annie called out "Bingo!" when she had five numbers in a row. Neither of us realized that we needed two intersecting lines to win that particular game. The only ways I remembered being able to win at bingo were either by doing exactly as she had--lining up five numbers in a row--or by having a total blackout of all the numbers on the card. But there were trickier shapes: double-lines, kites, the letters "k" and "z", and four corners among several other winning sequences. After awhile I noticed that a 5 x 5 grid on an electric sign overhead cycled through animated examples of winning formations for each current game.

At one point I scanned around the room to check out our competition. I did some basic math to estimate there were in the neighborhood of 500 people playing alongside us. Many had arranged several bingo markers in patterns around their cards. The marker of choice was not what I'd picked up at the dollar store but another brand that left glittery stamps over and around the numbers. More than a few players had stuffed animals--lucky charms, I presumed--set out in front of them.

After taking in the others around us who had also chosen bingo as their option for their weekend night out I asked Annie the obvious question:

"Do you think there's anybody, anybody at-all in this entire hall, who is younger than we are?" 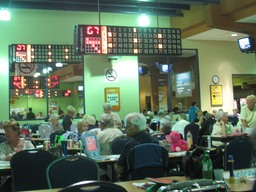 Annie looked long and hard at all the grey hair seated along parallel lines of tables but didn't immediately answer.

"Maybe that woman in the skirt down at the end over there?", I said. "I'm not certain. She could be younger or she could be older than we are... "

"How about those two?", Annie cocked her head in the direction of the wall behind me. I craned mine around to spot a young hipster couple: he with bushy goatee and leather jacket and she with tattoos covering her upper body visible from all the way across the hall. They were definitely younger and hipper than we were.

"What are they doing here!", I asked Annie. Then I thought about it and continued on:

"I suppose most of the other people here are wondering the exact same thing about us. The median age here must be at least 30 years older than ours... "

We kept on playing round after round through the final jackpot. Each was different. In addition to kites and letter k's all the other winning forms I didn't recall, there were games I didn't remember in which certain numbers were used to cover more than one square. In one such game if the digits called out could be reversed to represent another number on the card both would be valid. So, if the ball "I-21" were drawn, "B-12" would also be called out at the same time. Another twist was to call all numbers in the same column that ended in the same digit as the number drawn. So, when ball G-48 was drawn, G-58 would also be called simultaneously. In one of the final rounds all numbers ending in "6" across the card were displayed on the screen before any other balls were drawn.

Madame É. played bingo with us over one afternoon lesson of our francization courses--but there were no prizes and she sure didn't mix it up like this.

Though I did enjoy the evening, I think it will satisfy my bingo cravings for another 20 years. I joked with Annie that might be the right age to return, an age when we'd be about to start blending in with the regulars.