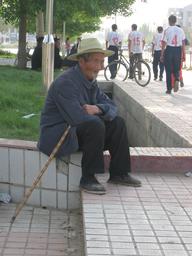 I'm finally outside of China for the first time in nearly six months. I suppose Hong Kong is technically part of the same country now, but it sure doesn't feel like it. It's still necessary to cross a border and go through immigration and customs formalities to get between here and anywhere else in China. There's so much more on offer: just walking down the street the food and merchandise options seem overwhelming, even in light of my time in Beijing last month. Driving is on the left; the Hong Kong dollar remains the only official currency. The streets--at least in Tsimshatsui--are thronged with people from every location imaginable: Nigeria, the sub-continent, all over Asia, Europe, and the Americas. There is a higher percentage and better quality of English on Hong Kong signs. That's good, because my comprehension level has plunged. Cantonese is as far from Mandarin as French is from Italian. Even the writing differs distinctly, using the traditional, full-form versions of characters which mainland China abandoned some fifty years ago.

Being in remote Urumchi would make anywhere seem cosmopolitan and flashy, but I've always felt a unique sense of energy and character when spending time in this city.

I'm currently at the lobby of the Holiday Inn on Nathan Road, the place Michael and I decided to rendezvous. He was supposed to fly from Calcutta to Bangkok this morning, then meet a friend at BKK to pick up a cheap ticket here. We'll probably find some cheap flophouse in the Chungking Mansions tonight. Once his mother arrives tomorrow we'll stay in the same hotel she does, which will presumably be of a higher class than the minimal standards Michael and I hold.

To get here I flew from Urumchi to border city Shenzhen this morning. Crossing that border is still the cheapest way to get to Hong Kong from most parts of China. A direct flight here from Urumchi would be far more expensive than the fare to Shenzhen was. Being the cheapskate I am, I even took the public bus into Shenzhen, walked across the border, then rode the KCR commuter train into town, rather than shelling out an extra 100 or so RMB for a direct bus from the airport across the border.

I've taken the Shenzhen route into or out of China many times, but the most interesting occasion must have been back in 1997 when traveling with my youngest brother, Alan. We'd been traveling around China over the month of June. We planned to be back in Hong Kong at the time of transfer from British to Chinese sovereignty. To complete the final portion of the journey we bought a pair of new bicycles in Guangzhou (Canton)--those weighty, black, one-speed clunkers which are still the default on the streets of Chinese cities. Brand-new with rack, bell, and fenders they cost less than $25 US each. It took us a couple days to pedal all the way to the border with Hong Kong, but was great fun. (One harrowing moment came when we took a shortcut to a ferry crossing through what turned out to be a quarry, right when they were setting off explosives. I suppose that will have to be another story, though.)

It feels strange to have concluded the term at Xinjiang University. I did skip out a few days early, so took my spoken Chinese final examination solo. The courses for foreigners don't require a tremendous amount of accountability, so I was surprised that any of the instructors held tests. I was happy to do pretty well, which came as a surprise.

Bad news came just before I left Urumchi. I'd been having difficulty reaching Shahnaz this past week. Finally, her mother answered when I rang her cell phone a couple days ago. It turns out that Shahnaz has been in the hospital for several days. I couldn't understand enough of what was being said in Uighur to glean the specifics, so asked Zhi Shuang to ring last night. Seems like whatever she has must be pretty severe: evidently Shahnaz has some sort of heart abnormality. I'm sure there must be a precise western medical term for her condition, derived from some classical etymology, but my Chinese dictionary didn't give an exact translation. Perhaps a reader who is skilled in both English and Chinese can fill me on exactly what xin ji yan 心肌炎 means. Seems like roughly, "inflammation of the heart".

I of course hope that her condition is not as serious as what Zhi Shuang's translation expressed. Still, hearing about this in light of my recent emergency hospital surgery has put me in a contemplative state. I already felt lucky that my hand has slowly been regaining functionality. That somebody in their early twenties might face a much worse condition really makes me appreciate what I've got.