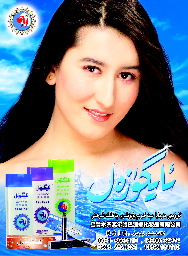 By spending my holiday in America I managed to miss five weeks of Urumqi's coldest weather. The temperatures still hover around freezing, but spring was trying hard yesterday. The ice and snow have been thawing into water and slush, then re-solidifying into smaller patches every night. It's been exceptionally clear for a city normally blanketed in smog.

A week ago I had a visual sense of how dirty the air typically is. I'd just picked up a white dress shirt which I had cleaned at one of the laundries on campus. By default shops here put everything into plastic bags, which I routinely refuse: why add to the waste? By the time I arrived back at my flat, I found the entire shirt covered in a layer of soot.

Despite a cold I can't shake (which I attribute to the pollution) I've been in good spirits since my return nearly two weeks ago. Walking around in the sunny afternoon yesterday brought home how much I like Urumqi itself. The newer glass skyscrapers stood out against the sky, competing with snow covered mountains towering around the city. The thaw brought the city streets and bazaar areas to life with the large, wooden pushcarts common around China. I was surprised to see so many types of fruit already in season. I suppose the bananas and kiwis are probably from the southern provinces, though I'm sure Xinjiang must be China's biggest producer of melons, grapes, and similar juicy delicacies. Yesterday seemed to be offering a hint of what summer days here can be like: colorful, alive, bustling, and beautiful.

I don't think I've had a moment alone since my return to Urumqi, which is not a problem. Nisagul and Shamsiya received me at the airport. Nisagul and Rahila have stayed on as houseguests at my flat, which has been wonderful. Having the two of them around casually chatting is great for soaking up the language. Their presence makes doing my homework a hell of a lot easier as well. My spoken Uighur skills are zooming up.

Borrowing from Mike--who saw travel across China as a means to frequent massage and accupressure foot washes--Nisagul, Rahila, and I splurged and went to a downtown massage parlor the other night. As the term massage parlor might conjure up, some of these places are indeed seedy and the services questionable. But my sense is that most of them are legitimate: massage seems a far more common custom across China than anywhere else I've visited. As Mike (who can't read a bit of Chinese) pointed out to me while here in October, these places are on every block. Prices depend on the city, but it's not difficult to get a couple hours of skilled treatment for about $6 U.S..

I should ask Mike exactly what he looks for when judging if a place is worth his 50 RMB. At least it's easy enough to avoid the obviously shady joints. Too many women hanging around the lobby is a bad sign. I also shy away from places which have beds instead of massage tables. Having the masseuse walk on your back is actually a fairly common service of a legitimate place, so I look for support rails attached to the ceiling above the massage tables. My sense is that the prostitution in this country is more commonly found around barber shops and karaoke lounges, anyway.

I always start with a good foot rub and soaking. The patron sits back in an armchair while the masseuse prepares a wooden vat of steaming water, brewed with a mixture of tea and herbs. Feet go in, and are then rubbed for an hour. I don't understand all the reflexology aspects, and it seems like every masseuse will claim that they notice something different about my body so are therefore concentrating on a certain area of my feet. She might focus on my big toe because, "Your kidneys need stimulation," or my heel, "For your liver." I neither comprehend nor care--it all feels great.

The back-walk is also one of my favorites. Despite my extolling of its wonders, Nisagul declined. Petite as her masseuse was, she was still 20 lbs. heavier than Nisagul.

Rahila found a modeling gig over the time I was away. Her face now sells soap on posters in markets across Xinjiang Province. It may lead to a spot on television advertisements as well.

So, I'm back in Urumqi, back in my apartment, and back in classes. I have a full schedule of Uighur, regular one-on-one sessions with an Islamic calligraphy instructor and am dabbling in Chinese. I decided I would repeat the same level of Chinese I took when arriving last year, as I felt there to be so much that never gelled. However, attending class today makes me unsure--I didn't really care for the teacher and the text seemed pretty easy. I know I won't feel "done" living in this corner of the world until I have a higher level of proficiency with that language. However, skipping a grade with the Chinese would mean less focus on my calligraphy and Uighur--the subjects which have priority.