Everything feels so different here. The direct bus between Tbilisi and Trabzon has not just taken me across the Georgian/Turkish border. It's taken me out of the lands of decrepit, post-Soviet infrastructure and into a place that feels like Europe. The fashions, the roads, the standard of cleanliness, and the prices are all a notch above what I've been experiencing up until now.

Trabzon is an ancient city on the Black Sea coast, with history going back at least to its days as colony of ancient Greece. For me, the main aspect I'm enjoying is that temperatures in Trabzon are far warmer than they were in Georgia and Armenia. It's quite a few degrees above freezing, even in the evening. That's made me eager to get out and explore once again.

The places I've visited around Trabzon so far haven't blown me away. The Hagia Sofia Museum was once a lovely stone church, the Trabzon Museum was once the home of a wealthy family. It may be that I'm jaded by the architecture I saw in Uzbekistan and Iran, but I'm suspecting all the really good stuff--both architecture and museum collections--will be in Istanbul. 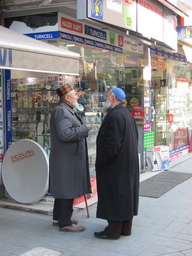 I'm finding that the Turkish language seems closer to Uighur than Turkmen or Kazakh, but not as close as Uzbek. I can understand bits here and there, but there are some things going on grammatically--with verb forms, mostly--that I have to figure out. Turkish has a lot of different vocabulary as well, but in some ways that's an advantage. Many words I find familiar from English or other European langauges (e.g. pension, service, touristic) are common in Turkish.

Yet far, I've noticed only one thing new to me. I don't know whether this is unique to Turkey or also the custom in other parts of the Middle East, but it seems common here to finish meals with a rinse of cologne. Both after finishing a boxed dinner served on the bus and after finishing dinner at a restaurant my first night here in Trabzon, I was offered cologne. In each case the attendant splashed perfumed water from a large plastic bottle onto my hands. The first time--unsure what to do--I glanced around to see what the other passengers on the bus were doing. Some of them just worked their hands around together, others patted about their face and head. No matter how long I travel, I think there will be something I find unique to each country when I first visit.

Random tidbit: It was only when seeing a sign for the Hagia Sofia Museum here in Trabzon that I understood the etymology of the English word "hagiography". I had heard of the famous mosque--built as a church--of the same name in Istanbul. I hadn't realized that "hagia" must be the same root in both the name of the church and the English word. The sign in Trabzon was in the shape of an arrow pointing to "St. Sofia Museum".