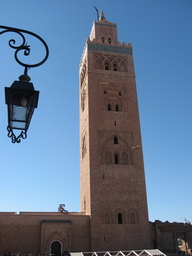 This afternoon, Ben and I took the bus from Marrakesh to Essaouira: a small, beautiful, old city right on the Atlantic Ocean. While at a rest stop midway, we were waiting for the bus to fill back up again.

"I suppose we should get ready to go soon, but I'm not going to get back on that bus just yet," I said to Ben. "This is one of my rules when I travel. When deciding to board, if there's nobody sitting in the driver's seat, what's the point in getting on the bus?"

"Yeah, I guess so. I wasn't trying to be pithy or anything. But yeah, that could make it into Reader's Digest or some sort of motivational literature."

Later that afternoon, we checked into a riad inside the old city walls. Right outside our window was a mosque. We couldn't decide whether it was better to keep the window opened or closed: somebody was repeatedly warbling over a loudspeaker, "Allah akbar!" Was it more ambient or irritating?

Our decision was made when several houseflies entered our room. Contemplating the circular flight pattern of one fly, Ben asked, "Don't flies have a really short lifespan? If that is the case, why do they spend so much of their time buzzing around in circles, doing nothing?"

"I don't know," I answered rhetorically. "I suppose you could say the same for humans and the decisions so many people make in how they spend their lives."