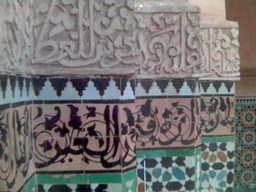 Desperation and anger in Fez are tangible, more so than in other places I've passed through on this trip.

Over this journey, I've seen the symptoms of poverty in so many of the countries I've crossed: Streets flowing with litter. Children without shoes. Agressive beggars. Young men hanging about the streets doing nothing. Even in countries where the infrastructure is better, such as Turkey, salaries can be low. In many places, underlying tension and frustration can be felt, even before that first conversation with a local.

In some of the places I've visited, what is most apparent is what is lacking--a lack of basic goods, a lack of opportunities, a lack of prospects for change. Hostility is not the automatic result. Certain cultures do have strong traditions of lavishing hospitality upon guests. Throughout Kyrgyzstan, Iran, and Mongolia, I repeatedly found that intense levels of desperation would be masked with aplomb and composure. In these countries, strangers are welcomed into homes, then offered tea, food--even lodging. The lack of material goods is inescapable, but grace and hospitality in personal interactions--especially with a guest--are maintained to the highest standard.

However, there is no facade of composure or resignation in Fez. The frustration is tangible. Walking around the old medina, young men with nothing to offer will approach every passer-by. "Which hotel are you looking for?" "Do you need a restaurant?" "I can give you a tour of a nearby tannery, very interesting..." The hope is that the owner of the establishment to which the tourist is taken will give a small commission.

This system of petty kickbacks to touts is common across many countries. The difference in Fez is in a hostility, just beneath the surface, which jumps right out. Declining politely is futile. A simple, "No thanks," will--at best--be returned with, "I just want to help you!" or, "I just want to practice English with you." Continuing along with, "Sorry, I'm really not interested," will be met with insults. Responses we've heard so far include: "Oh, you don't like Moroccans then!", "Open your heart!", and "Why do you act this way?", among other, much coarser, language. 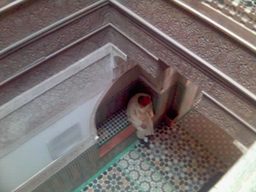 I've been contemplating whether it is possible that I might have passed through other areas where the behavior of angry, desperate, young men was the same as it is in Fez. I might not have noticed: I tend to blend in. A solo male with dark features doesn't attract attention much of the world. However, speaking English with Ben (who sports a hair length that no Moroccan man would consider) is an obvious signal that we are from elsewhere.

I wonder how this trip might have been different. How would this exact same journey I am now finishing--how would it have unfolded if I were perceived differently? What if my features were fair, my hair blond? What if I had a traveling companion over the trip? What would be the experiences of a woman, traveling the same route over the same timeline?