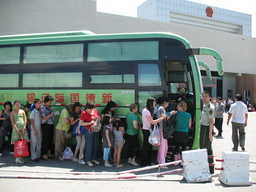 The Urumqi-Almaty sleeper-bus runs finally resumed yesterday afternoon. I expected that I'd have to wait until the regularly scheduled departure time of 7:00 P.M.--but bus-upon-bus was leaving throughout the afternoon. I'm glad that I called the station in advance to check.

Traffic within Urumqi wasn't totally back to normal, but it was better than the previous day when I had to walk all the way across the city to get home. I managed to get a taxi to the bus station, though I first had to hike 10 minutes up Tuan Jie Lu to reach a point where cabs were running.

Lots of other people wanted out of Urumqi as well. Over a two-hour span waiting at the terminal, my ticket was re-issued for three different buses. I had a reserved berth on each of them, but come departure time there was some additional passenger left without a place. I was the one shuffled off from the first two. Like everybody else, I too wanted to get out of town as soon as possible. But I didn't mind being the one to give up his seat--it didn't matter if I got bumped to a later departure. Leaving Urumqi in the late afternoon, I knew that none of the buses could make it all the way to the Kazakhstan border before passport control closed for the night.

So it wasn't until this morning a small fleet of buses--among them the other two I'd been kicked off from--brought their passengers to the Khorgos border crossing. I had expected the chaotic exodus I'd experienced every other time when crossing through that point before. Getting through that border always involves pushing and shoving. Too many people try to bring too many goods back from China through too small an immigration hall. However, I hadn't expected the additional hassle of being taken aside and given extra scrutiny. The police in Urumqi knew that I was leaving by bus to Almaty: my name had certainly been flagged for a thorough inspection.

My first sense that something was different was the moment the officer in charge of exit formalities entered my passport data into her computer. She asked me a question I've never been asked before at Chinese immigration control: "What is your Chinese name?" When I told her, I was instructed to wait. After about 15 minutes of standing around waiting another immigration official came up to me. His first question was to ask me specifically whether I had taken photos during the riots in Urumqi.

I assumed that the police in Urumqi had alerted the border post and filled them in on all the details of my interactions with them over the past few days.

"Oh, sure--yeah! I took lots of photos. And you wouldn't believe what a headache I've had with Urumqi police headquarters because of that."

"Come with me into this back room over here," the officer ordered.

There were four other immigration officials in the back room, several of whom asked me further questions.

"You come to China quite a lot," one officer said, flipping through my passport and seeing Chinese visa upon Chinese visa.

"Yeah, I was a student for a few years at Xinjiang University. I was just passing through this time when everything went berserk in Urumqi. This visit to China was supposed to be transit. I'm trying to get to the wedding of this friend of mine in Bishkek, tomorrow."

"You do travel a lot around Asia. Tell us all the countries you've been to that border China."

"All the countries I've been to that border China? I think I've been to all of them. Well, except for Bhutan. And North Korea. Haven't been there. Oh yeah, Vietnam--haven't made it to that one yet."

"So tell us which countries you have been to, then."

I tried to imagine a map of China and work my way around its perimeter clockwise.

"I've been to Mongolia. Russia. Do Hong Kong and Macao count? Laos. Burma. India. Nepal. Pakistan. Haven't been to Tajikistan yet, but that should come on this trip. Kyrgyzstan. Kazakhstan."

"And you've been to Afghanistan, too."

"Oh yeah... that's right... forgot that one. That was back when I was coming up to settle in Xinjiang for the first time."

They must have been flipping through my passport while I was waiting at immigration control. Seeing dozens of visas for countries whose name ended in "-stan"--along with the many other Muslim countries I have visited--seemed to have sparked suspicion.

"Turkey? Yeah, I've been through there. But that one doesn't border on China. Or, did you want me to list everywhere I've been in Asia? Well, let's see now... I used to work in Japan. Then there was the friend I stayed with for a week last year in South Korea... he's the one getting married next week in Kyrgyzstan. That's where I'm on my way now to attend his wedding. Did I mention that?..."

My prattling on seemed the right approach. One of the officers chose to change the topic, rather than hear me launch into a fuller description of details they already knew.

"What is your ethnicity?"

I found it ironic that I had been asked this very question three days prior under such different circumstances.

"My father is Chinese. My mother is American," I answered truthfully.

"So, what about the photos you took. Can we see them?"

"Oh, not anymore. See my camera here? The police in Urumqi actually let me keep all those photos I took--which I found surprising. But I figured it wasn't a good idea to keep them on this camera. They're not on here. You can take a look for yourselves."

An officer turned my camera on and scanned through everything saved to that memory card. All images were ones I'd shot of the bus trip over the past day. He shared the ones with locations he recognized with the other officers. 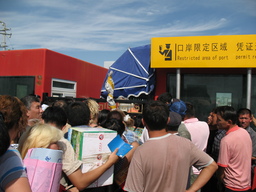 "Hmm. This one here... that's that restaurant and toilet stop a few hours out of Urumqi. Hey! That's our border crossing, right outside," he exclaimed.

"Yeah, I shot that one this morning," I announced to nobody in particular. "Look how crowded it is out there: so many people trying to get through that one little gate. But I guess you all know that."

The inspecting officer turned my camera off upon finding nothing interesting in any of the photos.

"Do you have a separate camera?"

"Nope... just the one. Check for yourselves. Go ahead, open my bag up."

The officer in charge ordered another immigration official to do just that. But I could tell that by being truthful--yet expounding to the point of ridiculousness when answering their questions--that they believed me. I just hoped that they wouldn't find the other memory card which lay in a jumble of headphones, cables, and electronic devices.

The officer in charge instructed that only a "cursory" search be performed. I think that executing the search was more to gauge my reaction than to actually reveal anything hidden. They didn't completely examine every inch of my bag, but it was by far the most thorough inspection I've been through upon leaving any country. Strangely, after 15 minutes of examining my belongings they did not find that other memory card--which still held every other image I'd shot over the past month. They didn't ask specifically for it so I didn't volunteer it.

Honestly, I don't believe that they could have cared even if they had found that memory card. Most of the pictures I had shot were images of overturned cars and broken windows. The scenes broadcast on China state television were far grislier. The nightly news showed closed-circuit video footage that captured images of mobs beating people to death. They also showed long interviews with survivors recounting their experiences from hospital beds and weeping tourists from other parts of China who had lost loved ones in the violence.

I hadn't taken pictures of any of the most gruesome scenes I'd witnessed. Neither of the corpses I'd encountered were included in the photos I'd shot. Even if I did have such images, those still photos would have been too boring to broadcast on CCTV--compared to the video footage shown on the nightly news.

Satisfied, the inspecting officer began putting my belongings into my knapsack. But he had trouble placing everything back in as neatly as the small space required. When I offered to help re-pack--and they didn't mind--I knew that the interview was over. Another officer handed my passport back. I shook hands with a few of them and stepped out into the heat where everybody else was waiting for the buses to re-load.

I had never before been so happy to cross that border into Kazakhstan.

After a full day of driving the bus finally pulled into Almaty. It's now about 9:30 P.M. and I am dead-tired. It's a shame I won't have longer here: Almaty is a lovely city. When I booked my ticket I figured on having about two or three days here to linger and enjoy being back. With only one night I'll instead see little more than the area around the bus station.

Even if I did have the energy to venture further into the city, there would be little point in leaving this area. I have to get into Bishkek tomorrow. I just managed to call Jochen and speak with him directly. Fortunately, his wedding will be held in the evening. It should be possible for me to take some sort of morning departure for the final leg. There are supposed to be minibuses running all the time directly from Almaty to Bishkek. It's only three hours to the Kyrgyzstan border--I'm hopeful there will be no issues crossing that border.

Thinking about it now, I am so thankful that I got both my Kazakhstan and Kyrgyzstan visas before arriving in Urumqi. Had I applied for either visa once in Urumqi, I'm certain that my passport would yet be locked up in some consulate, closed on account of the crisis.

I'm just a short ride from Bishkek. I hope I can make it in time for the wedding.