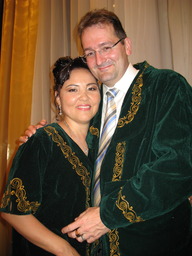 I haven't had a moment to catch my breath. But I made it to the wedding--and it was beautiful.

The last leg in my voyage from Urumqi to Bishkek was the easiest. I took a minibus from Almaty into Bishkek early yesterday afternoon. I didn't have to wait long for a morning departure from Almaty's Sairan bus station; the time spent waiting to cross the Kazakh/Krygyz border was trivial. My minibus arrived into Bishkek early enough that--rather than meeting up with Jochen immediately--I decided to first run an errand: I went straight to the U.S. embassy to get additional pages added to my passport.

Even with the hairline margin between arriving into town and attending the wedding later that evening, I knew I should take care of this one errand first. I guess I perpetually operate in a certain "travel mode"--taking care of arrangements to reach a further destination--sometimes even before I've settled into the place where I've just arrived.

For example, I often find it most convenient to buy the train or bus ticket on to my next destination as soon as I arrive in a city. If I have already decided beforehand how long I will stay in that city, buying the onward ticket upon arrival will save me from making a separate trip back to the station. In this case, I knew that if I didn't take that very moment to add those passport pages there would be a cumulative effect: everything else I needed to do over the next days would have to be be delayed. It was Friday afternoon. Adding pages any later would mean waiting until Monday to visit the U.S. embassy. In turn, without free pages, I wouldn't be able to apply for my visa and permit for travel in the Gorno-Badakhshan mountain region from the Tajikistan embassy until Tuesday.

I would have rather met up immediately with Jochen and Gulaim, but knew that taking advantage of those first hours in town to run that errand would buy me flexibility with time later.

It took some time waiting at the embassy, but once I had my pages added I got around to the other routine errands that are second nature upon arriving in a new country: get local money, get into the central part of town, and get a local SIM card for my phone.

I don't always get a local mobile number every time I cross a border, but knew I would need one for this visit. Not only did I need a way to contact Jochen, but I wanted a way to send a text message to family in the U.S. to let them know where I was and that I was well. As soon as I sent the SMS message out Ben called me back to say that everybody in Seattle had been terribly worried. Apparently, that note was the first they heard from me since the riots began in Urumqi. I knew that Internet access was completely blocked within Xinjiang, but had figured that the text message I had sent via SMS must have reached some family member. I was wrong. 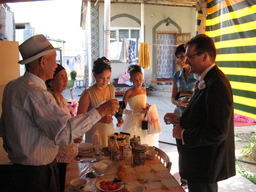 With all my errrands taken care of I was finally ready to track down the wedding party. I found Jochen, Gulaim, and Begam-ai all at Gulaim's family home, primping themselves for the wedding. Though the reception was to be held at Dasmia, a large banquet hall in central Bishkek, Gulaim's family were presently handling the slaughter and carving up of the sheep that would provide much of the meat for the meal.

While Jochen was off changing into his wedding attire I sipped tea and made conversation as I could with those around me, mostly relatives of Gulaim's. I still can't communicate fully, but find the difference between Uighur and Kyrgyz (as well as the other Turkic languages) seems to be less and less each time I come back through the 'Stans.

After he was all dressed up, Jochen asked me if I'd be willing to wear a tie to the event.

"You can use one of mine. Though I brought only two... and the one I'm not wearing is pink. Is that okay?"

"Sure. Maybe it will go with my blue shirt," I laughed, slipping the tie on.

It crossed my mind that the color of tie Michael chose for me when I participated in his wedding last year was also pink. Are pink ties some current wedding fad or do my friends think that I might actually look good in one? Whichever the case, I'm not one to turn down a request from a friend on his wedding day.

Jochen said that a taxi was coming to pick us up to take us to the banquet hall. With his sense of humor I should have known to expect something else. When he announced that the cab had arrived I stepped through the front gate to find not a taxi but a huge stretch limousine--made from two halves of a Hummer--parked along the dirt road outside the family home. I crawled into the limo, backpack and all. Inside was a small bar lit by blue LED's. Bottles were kept in a compartment beneath, racks of champagne flutes above. Thin video screens gave options for playing various Russian pop music. 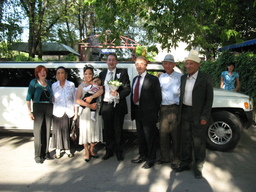 We stopped off en route to pick up Jochen's parents, who had flown in from Germany for the event. After everybody was together, we paused for a few minutes to take photos of everybody together in Bishkek's central plaza. I expected that upon arrival at Dasmia I would then spend the rest of the evening sitting at some remote, round table--straining to make conversation with people I'd never met. However, when we got up to the banquet hall Jochen insisted that I be seated at the central table, at the seat just to the left of where he himself sat. That actually put me closer to the bride and groom than either set of parents: both sets of whom were seated further down the central table.

Most of the food was traditional Central Asian: polo, horse-meat qeza, and samsa. There were some twists to the menu, though. One course included chicken kebabs that had been steamed, rather than barbecued. Another course was of a tasty fish and vegetable dish--not fare I've commonly eaten any other part of Central Asia. It was all delicious.

At some point in the evening the group of people seated around each table had to gather in the center of the room to offer a toast to the bride and groom. I couldn't follow most of what was said in Kyrgyz. I did realize that I would probably be called upon at some point to make a toast myself--which actually sounded kind of fun. I've grown more comfortable speaking out at weddings, having done so on a couple other occasions in the past year.

When my turn came, I thought I was carrying along fairly well, articulating a nice speech about how Jochen and I first met while traveling in Kashgar 16 years ago. Then, somebody came up from one of the tables to "help me out" by translating. I was speaking in English--which I figured didn't really matter--the two people I was addressing could understand. But the level of English this sudden translator could speak was so basic. I decided to simplify my words and abridge my speech in the hope that whatever it was he was turning it into in Russian might stand a chance of being close to what I was actually saying. 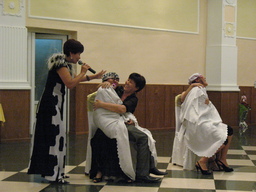 In addition to the sort of activities that would be expected at a wedding--dancing, rounds of toasts--there were a number of silly games. The first challenge brought four participants to the center of the dance floor. Two women had one minute to swaddle another adult in oversized baby clothes, stick a pacifier into their mouth, and cradle them in her lap. The final step was the "child" wailing aloud; the audience judged which "baby" looked and sounded most authentic.

Another game had people wound up in gauze--like a mummy--as quickly and completely as possible. I was caught up in two games involving fruit. I couldn't understand the instructions but it seemed that couples had to take either end of a peeled banana in their mouth and dance about together for two minutes. At least that's what my dance partner and everybody else on the floor started doing. I followed along as best as I could. The second game I fell victim to also forced couples to dance about the hall--this time with an apple pressed between their foreheads.

I don't know if it was on account of the suggestive fruit games, the bold pink tie, or traditional Kyrgyz hospitality, but I was getting a lot more attention than I would normally receive in such a situation. Every few minutes over the course of the evening one or the other of two women in attendance would flirt, by the evening's end both directly suggested that I come back to stay. One of the two looked pretty good... she had been introduced to me earlier as being a ballerina. She was lithe yet muscular and could certainly move about the dance floor. Hmm... a night together with a ballerina sounded fun. But, I reasoned that running off with some other relative would be bad form--Jochen had lined up a place for me to stay beforehand. I was to stay at the home of one of Gulaim's sisters.

The evening tapered off with more dancing and far too much vodka. Impromptu rounds of shots and toasts--no longer just to the bride and groom, but to anything at all--were unavoidable, no matter where I sat. I noticed people using the trick that I'd first heard about back in China, also a land where dinners degenerate into drunken rounds of alcohol-swilling. The trick: people don't actually down the shot. There are always other glasses on the table nearby, usually of tea. After knocking the entire glass of vodka back into their mouth--but not down their throat--many drinkers surreptitiously backwash the booze into a nearby cup of tea. 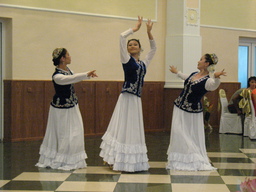 Since that technique was first pointed out to me, I've found that most people moderate their shots this way. I followed suit as discreetly as possible.

Even being sure to sip and spit on the sly, I'm sure that I wasn't the only one who could barely stagger out to the minibus which had been commissioned to bring families back to their homes at the end of the evening. As people filed out there were many more congratulations offered; everybody seemed to be in a happy mood. What a night...

So. Thank you so much for inviting me, Jochen and Gulaim. I had no idea that your wedding would be so grand. I didn't expect you to give me the seat of honor. I'm certain that I will never attend another wedding that I could compare in any way to the one you two just held.

I have no idea when we will next meet, but I am certain of two things: it will be in some distant location, and we will--as always--have a lot of fun together.