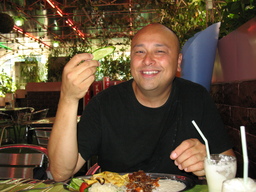 Friederike and I were both studying Uighur in Urumqi in 2004; we last saw each other a year ago when I was passing through Berlin. Friederike has finally found time to return to Central Asia; she just arrived in Dushanbe herself some days ago. It's probable that we can synch time in the area to travel together for the next week or two.

Our first dinner together in Tajikistan found us eating not local food, but Georgian cuisine. I was disappointed: the restaurant had no Georgian wine on hand and their khachapuri tasted bland.

The shortcomings in the food were made up for by how much we laughed at the printed menu itself. Long after we ordered we continued to read the menu aloud for the humor-value. Excerpts below: