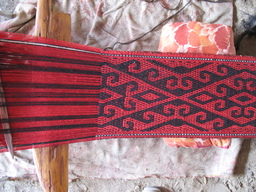 Friederike and I strolled down along the riverside this morning. We knew that Alichur was a small, dry, remote village: perhaps there wouldn't be much to discover. All the same, we had nothing else to do. We were told that it wouldn't be until the afternoon there might be any traffic at all heading on to our next destination, Murghab.

It turned out to be a full day of connecting with interesting people, people who use their hands to eke out an existence--in ways that have become obsolete much of the western world.

Walking along the bank we first encountered people scooping soft clay up and molding it into blocks. We asked an old man with a long beard and tall cap who was grazing his donkey next to the river just what it was people were doing with the clay. Before answering, he asked whether we could speak Russian.

"She can speak a bit of the language," I gestured towards Friederike.

"Huh?", neither Friederike nor I understood that word. 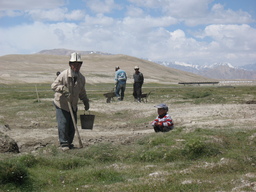 He continued on--providing a synonym first in Russian, then in Kyrgyz: "Dom. Oy."

"Oh," We could finally comprehend. "You're building a house."

As we walked on down the riverbank I guessed at the meaning of that first word he uttered.

We walked on a bit further and came across a loom. There was nobody about, but a beautiful, unfinished piece was somewhere on its way to becoming fully woven. We asked the first person who happened by--a child--just who the weaver was. That spurred several kids running off to bring back a woman who sat down at the head of the loom. 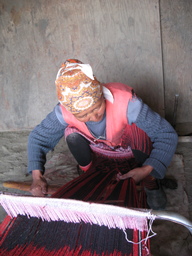 She began furthering her work. Click-slip-clack. Click-slip-clack. The weaver ran a dull wooden blade up-and-down between strands extending out from several skeins. After watching her weave for about twenty minutes we thanked her and walked further down the riverside.

Upon arriving at the edge of town we came across a clay, dung-fired oven with smoke billowing out. A woman standing next to it was baking that day's nan. Once everything inside had been fully baked, the woman offered us a piece of nan--then carried a basket full of the remaining bread back to her house.

It hadn't taken much of the morning to walk the length of the town and meet all these interesting people. We lingered a bit longer (over a lunch of boiled potatoes) at Rahima's home, where we'd stayed the last two nights. We finally tried hitching our ride out of town only after it seemed late enough that there might be eastbound traffic.

Several hours of waiting by the roadside found only one car--which was already full--passing in our direction. However, our patience in waiting on a lift was eventually rewarded by the second car that eventually followed on. After five hours of waiting, two westerners working for the UNDP in Dushanbe--Carly and Celeste--stopped to pick us up. They were ditching work back in the capital to take an impromptu jaunt through the Pamirs. Thankfully, they had room for two more in their Jeep.

After arrival in Murghab the four of us first found a hotel room, then took dinner together at a simple restaurant just off the bazaar. The menu was limited. Only two dishes were available that night: goulash and buckwheat. One funny thing I find with trying to speak too many languages: sometimes I forget the most obvious meaning of what I hear. Upon first hearing "goulash" I couldn't parse what that could mean. "What is this 'goulash' dish," I wondered. I had interepreted the word in a literal Turkic sense of "gul-ash"--which would mean "flower-soup". It took me a minute to realize that I knew perfectly well what dish goulash was. 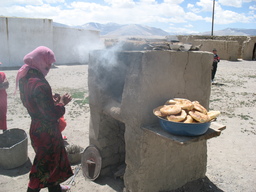 Before arriving in Murghab we had considered staying a day to relax and recuperate from hard travel through the mountains. However, Murghab seems to be not that interesting--and perhaps even harsher--of a place. To be honest, it feels like the edge of the earth out here. This town is remote beyond anywhere I could imagine.

Carly and Celeste have invited us to go on a walk through the surrounding hills tomorrow morning. I guess we'll think about it over breakfast. It would be nice to linger and see what sights there are in the farthest eastern part of Tajikistan. However, I'm sensing that it might be good to get out of Murghab as soon as possible. A direct bus up to Osh--remote as Osh is--would find us back in civilization.