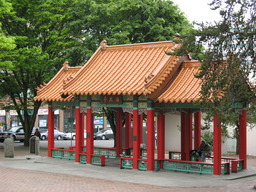 Full, grey beard. Camouflage coat. Jeans. Sturdy boots. Knapsack. Should I sit down next to this guy?

I could have gone home to eat my lunch: my apartment was just across the street. I instead chose to take advantage of one of my last chances to eat out in the neighborhood. I stepped into the pagoda in Hing Hay Park.

As I moved toward one of the stools dotting the table in the center of the pagoda, the man I was passing lifted his chin from his chest.

"Oh. You're actually at work now then?", he spoke out in a gruff voice upon spying my bag with U.S. Census Bureau emblazoned on the side. "Do you want to count me?"

"Do you stay on a block around here?", I asked, taking my seat.

"I used to live right over there... " He pointed his finger up, out of the park, and across King Street. He was pointing toward the apartment building where I live now; pointing toward my home.

"But, I've been on the streets since they renovated," he finished. His chin returned to his chest.

"I actually live there now. It's kind of a rough place... " I let words slip out, reminded of neighbors I'd interviewed over past weeks in the building. Several people whose doors I'd knocked upon to complete their census questionnaires seemed in a worse way than the man beneath the pagoda: Longer, greyer beards. More ragged clothes.

Realizing I was likely making some faux pas by describing my regular--his former--living quarters to a man who just told me he had been living on the streets for years, I quickly changed subject:

"I suppose you saw it before they fixed it up. What was it like before?"

He plucked in an exaggerated manner at the whiskers extending out from his chin, just in case I didn't catch his pun. The man capturing my attention continued on:

"Do you know the building handyman?" (I did know him; I had just taken his questionnaire the last week.) "He saved my life once. I got jumped by a bunch of guys in my room. He happened to have the key to my unit and was walking by at that moment. I would have been gone if he hadn't happened to come down the hallway right then. The cops would have arrived too late... "

By this point in his story, I was about to eat the last bite of the banh mi sandwich I had brought for lunch. I paused before scarfing it down. It crossed my mind that it was probably impolite to not offer some shared morsel to an old, homeless man--especially one with stories to tell. I also had an unopened package of spring rolls in my bag that I was planning to call dinner. Should I share either? Was there a polite way to offer?

The man who once lived in my apartment didn't seem to be hinting at any need for food--or for spare change. His stories were lucid and full of detail: the handyman's name, the building manager's name, the name of the new landlord who refurbished the place. His clothes were clean and his boots in good shape. Still... was it another faux pas to not share what food I had?

After taking the last bite of my sandwich I finally regarded an object that had been lying out on the table where I was seated. Off to one side of the octagonal marble surface lay a plain, white cake box. Before placing it on the table in the park, whoever had left it out had first scrawled these words on its lid:

I hefted the box to determine whether it was empty. I pulled the lid back. It was bursting with pastries. I brought the box over to the the man telling me stories.

"Check this out! I think you get first dibs," I offered.

He didn't even peek inside. "Oh, I'm not too hungry. A couple old ladies left that here about 30 minutes ago."

"Well... save a nut-less croissant for me," the bearded man requested.

I pulled out a croissant that was layered in marzipan and sprinkled with confectioners' sugar and slivered almonds. I placed the box back onto the table and took a bite.

"See you around," I said, stepping off toward my apartment.