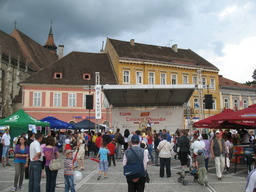 So, Irina and I were sitting in a pub in Transylvania...

"Yeah. So? We were a team of only two," I tried to console. "We got 81 points. The next team to come in above us had twice as many players: and their score was only 86. The winning team had six times as many players as we did."

Irina is clearly not the type accustomed to finishing even in second-place--let-alone, last.

The two of us had just finished a night out over a pub quiz. Most of the questions centered around arcane local knowledge. We had no chance, whatever.

The first round was presented as a color print-out of celebrities to identify. We felt stupid recognizing only three of ten--until the answers were read out and we learnt that the remainder were Romanian actors and pop stars from decades long past.

We performed well on both the general-knowledge and geography rounds. We performed not-so-well on the music-identification round. That was weighted in favor of old Romanian pop music that even the locals found challenging to identify.

Brașov--née Kronstadt--may fall within the borders of today's Romania, but the city was built-up a couple centuries ago by the Germans. Steepled churches; cobblestone lanes; grand, pastel-colored houses--I find Brașov cute and quaint.

Not so, Irina. As she originally hails from Germany, Brașov looks the same to her as any of hundreds of other small cities from her homeland.

We've struck a compromise between her indifference and my charmed reaction to Brașov. We're giving this town three days--which is more time than we gave Romania's capital. We spent only two nights back in Bucharest.

Today, we took local buses out to the nearby village of Bran. We visited the town solely as it's the site of a well-maintained mediæval castle. Bran certainly plays up the structure's status as "Transylvanian castle." Tourist-trap or not, we had to visit. When back in Pakistan I dropped 150 rupees on a copy of Dracula when looking for anything at-all to read in English.

I was surprised by how engaging and compelling I found the novel. Before the two of us had taken the train out of Peshawar, I'd already passed the book along to Irina. Both of us read every word from cover to cover.

At the castle, Irina continued her tack of presenting credentials to get a discount. No press passes were honored at the Bran Castle. However, presenting a current card identifying herself as a doctoral student at University of Vienna netted half-price. I thought I was the savvy one at getting over on ticket fees. But, I have to concede that I have met the true master.

The castle was cool.

We'll take a couple more days in Romania. Both of us are excited about destinations beyond. Our route will essentially wrap a circuit around the Black Sea. We'll then fork off west and continue on together back into the EU.