I've been spending the past few days catching up with my hosts, Tristan and Victoria. They're friends who I met back in Urumqi, over my last year at Xinjiang University. Several years before making their way out to Urumqi, Tristan and Victoria were students here in London, at SOAS: The University of London School of Oriental and African Studies. Unsurprisingly, many of their friends are also fellow SOAS alumni. Hanging out with Tristan, Victoria, and their many friends, I've found myself in the unfamiliar state of not having to elaborate and give explanations as to just where it is I've come from whenever meeting somebody new. Not only do most of Tristan and Victoria's friends have a good sense of which places lie where around Asia, it seems like every last one of their friends has also made a trip to Urumqi at some point.

We've been quite social, most often getting together over food or drink. At home, there have been a couple dinner gatherings with me as chef, attempting to cook couscous or Indian food. Victoria has been busy in the kitchen often as well. Today she cooked up a traditional Sunday Roast. On occasion, we all go out somewhere: often to some pub or restaurant with friends. Thursday evening was even more of an event: Tristan invited us to the opening night party at the photography gallery where he works: lots of champagne flutes around. I found it amusing that, despite free booze flowing at the exhibition opening, we still followed the tradition of an obligatory pint at a nearby pub, both before and after the event.

I've been seeing other familiar faces as well. Saturday, I got together with Dion, who hosted me in Tbilisi earlier on this journey. She had literally just flown in, arriving from a long trip from Tbilisi mere hours before. Dion had only a few hours in London, so we took what time we could together. We caught up over breakfast at a simple restaurant near Victoria Station, then spent our remaining time visiting the Tate Modern.

It was good to re-connect with Dion. I've recently met up with several people around other parts of Europe, also people who I had previously met through CouchSurfing. It's good to affirm that there truly is more to CouchSurfing than a free night's lodging, good to know that there is a continuity to the connections made.

London is different from as I remember it. I suppose it has been nearly a decade since I was last here. And I never was all that connected to the city. But that said, here are some things I've been noticing that I don't recall from before: 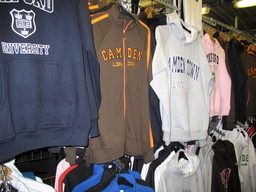