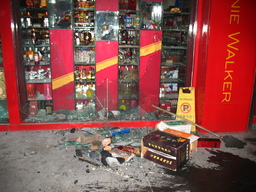 This time, the groggy guard didn't seem to care if I went off alone to the restroom down the hall. When I returned he offered me a tub of instant noodles and two bottles of drinking water for breakfast. I had managed maybe two-or-three hours of sleep on a couch at the station. It was around 8:30 in the morning.

After scooping me up from the area of riots the previous night and bringing me into police headquarters I was subjected to an interview. That ran from roughly 2:30 the morning of July 6 until whatever time it was they offered me the couch to sleep on. The one officer with any ability in English spoke haltingly with limited vocabulary. Despite his lack of fluency, I still figured it best to deliver my statement in a language I could understand fully. A statement in Chinese or Uighur might quote me saying things I didn't intend to say.

The questions started out fairly routine:

"Where were you last night?"

"I was out with friends. We were at a cafe on Ming De Lu, playing cards."

"Then how did you end up in that Uighur neighborhood, Sai Ma Chang, on the south end of town?"

I explained how I was trying to walk back to where I was staying: Meenday's apartment near the broadcasting station. I had decided from the moment I'd given myself up to the riot police who were sieging the compound that every detail I gave would be entirely true. I had done nothing wrong. My mistake was finding myself in the worst place at the worst time. However, the point the officers kept coming around to--and seemed genuinely baffled by--was why I would take photos of the destruction throughout the streets that night.

I decided that the best approach would be to actively demonstrate that I had nothing to hide and thought little of the matter.

"Here, let me show you on my camera. See, here I am with my friends at the cafe. Look at the timestamp: 9:00 P.M.. Then this shot is the point where the soldiers wouldn't let us through, so we took that alternate route to Xin Hua Nan Lu. Here's the place where we started to see cars that had been flipped over and windows smashed out."

"What do you think about all this?"

"So why did you take photos?"

"How many people do I consider friends here? I don't know. Go ahead and take a look at the address book of my mobile phone."

The police started attempting to write names and numbers from my phone onto a scrap of paper but had difficulty with the English. They quickly managed the names that I had saved in Chinese characters, but those were only of the ethnic Han I know, most of whom live on China's east coast, far from Urumqi. The majority of the contacts stored in my phone were of local minorities with a few scattered foreign names. I had saved all the non-Chinese names using the Roman script--which proved hard to parse for people who are used to writing in characters. After collecting about ten of the names that weren't saved in Chinese the police gave up. There were dozens more saved into my phone.

"So, do you have any relatives in China?"

I could tell that the interview was going in a direction that it didn't need to. To regain control, I replied:

"I'm very happy to answer all of your questions, but my Chinese is not so good. I think it would be best for everybody if we were to get somebody with perfect English and Chinese language skills. I think the U.S. Embassy in Beijing would be the right people to contact to arrange somebody to play that role. Again, I'm very happy to answer your questions. Let's please continue... but after I've asked the embassy if they can help translate. I just want to make sure that everything is very clear."

The interview ended not long thereafter.

The officers handling my situation had been trying to contact Meenday throughout the night. My passport was at her apartment; they wanted her to bring it to the station. She hadn't answered any of the calls the police repeatedly placed, but that didn't surprise me. All communications--phone calls, SMS text messages--had been irregular since the riots erupted the previous night. (As it turned out, Meenday had stayed the night in her office. Nobody went home from the station that night: the walk across Tuan Jie Lu would have crossed one of the areas of heaviest violence.)

Around 10:00 A.M., the police finally got through to Meenday. Just getting up to police headquarters at Nan Hu was a trial. Cabs were running, but scarce. She had to combine long stretches of walking with irregular bus service. Upon arrival, we were interviewed separately. She was kept-on in the same large office where I had been interviewed and had slept the night. Before they began questioning her, I was shuttled to an office down the hall to sit on another black couch, identical to the one I had slept fitfully on. A couple officers were working there, frequently going in and out of that room. One seemed to be handling routine visa formalities: there was a plastic handbasket of passports--mostly from Kazakhstan--on his desk.

Since waking up that morning I had decided to speak in Chinese with all the officers. There was little advantage in insisting on English, now that my statement had been delivered and signed. While sitting in this other room the officer who was not preoccupied with the basket of passsports chatted with me. It was essentially the same conversation that I had when being interviewed, but in a casual, non-formal way.

Though he smiled and laughed in a friendly manner, I assumed that anything I said would be cross-checked against what Meenday had to say and against the formal interview I'd given in the early hours. It didn't really matter. Everything I had told the police was the truth. I knew that Meenday would answer all questions fully and honestly, as well.

I tried shooting questions back to the officer who wanted to take the conversational, friendly tack. He was good: he kept the banter flowing, yet maintained his role of being the only one asking questions.

"So, I was walking around last night trying to get to the part of town where I was staying. I wind up in this Uighur quarter. Then all of you police come in--I'd never seen so many police in my life. How many do you think there were out there then? At least 100... maybe even 200, I'd guess."

"Who do you think was behind all the problems last night?", he asked me.

This seemed like a segue into my take on Han/Uighur relations. I was happy to give a full accounting of the facts of my situation, but there was no need to engage a specific conversation about ethnic tensions. "Unemployed youth," I ventured. "I think it must be that when a lot of young men have no job and no money they get angry. That's probably why there were problems last night."

He called my answer with one even more ridiculous: "Oh no, it's a problem of Islamic insurgency. This was started by people who came from Afghanistan and Pakistan to cause problems."

By the mid-afternoon it seemed like there might be a way to resolve the situation of what to do with me. The officer who had posed all the questions during my interview determined that I should be fined.

"There are several things about your stay in Urumqi that are out-of-order. First, you didn't have your passport on you when you were out on the streets. Second, you're staying at Meenday's place. Whenever a foreigner stays at a private residence they must register at the local precinct within 24 hours. These are the regulations across all China.

I had heard of foreigners being fined before--Rian and Laura received fines once while walking back to their own apartment. The irregularities cited and amounts were identical: not carrying a passport, never registering their stay at the local precinct. At present rates, 1,500 yuan would convert to $220 USD. I didn't feel that fining me was really appropriate, but couldn't argue much with the police. And if paying these fines would resolve the matter and let me be free to leave, so be it. Several days before the riots erupted I had bought a ticket for a 7:00 P.M. bus to Almaty. That was to leave that very night. Maybe if we could square everything at that moment I might still make that bus.

"Oh, I'm very sorry. I'll be sure to register if I stay at a local residence in China again. Am I supposed to just pay you directly? If so that would be convenient for me, as I have a ticket on a bus bound for Almaty leaving in just a few hours."

"That's not going to work," the officer replied. "It's coming up on 3:00 in the afternoon now. That's when our office closes. There will be no way to get the paperwork ready before everybody leaves the office at that time. You need to pay the fines at the bank and bring a receipt back to me. We don't handle the payments here. So, you won't be leaving for Almaty today."

"Should I rebook my ticket for tomorrow, then?", I asked.

"Don't," he replied. "There's still the matter of all those photos you took. How that is resolved is not for me to decide. It's not a matter for even my boss to decide. It will have to be my boss's boss who will determine how that matter is resolved. And he's very busy these days. You can leave now and go back to Meenday's place. Stay there tonight. Your passport and camera will stay here. Come back tomorrow morning--July 7--at 11:00 A.M.. But if you wind up staying on longer at Meenday's place, be sure to register at the local precinct."

Meenday and I took a taxi home. After catching up over tea, she went to the bus station to alter the date of my ticket to Almaty. Getting a refund would mean losing a percentage of the ticket price, so she took the chance that I would be free to leave the next evening, July 7.

I crawled into bed and slept for 13 hours, straight.