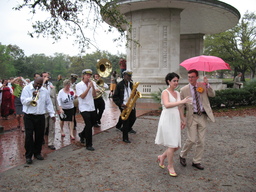 I suspect I was the only of the wedding guests who rode the public bus into the city from the airport. The bus was crowded. The service was slow. The coinbox literally fell apart when I tried to pay my fare--the driver had to pick its plastic cover up off the floor to piece it back together. All the same, I couldn't complain. I arrived into town right on schedule; at $1.60 all the way into New Orleans I could have endured a lot more and still found it a bargain.

At the end of the line I walked north along Rampart St., up past the park. It was a good day for a short stroll--nice to be away from the Seattle cold. Everybody who came into town for the wedding was staying at the French Quarter Courtyard Hotel... I checked myself in. Rian found me next to the pool and offered me an afternoon drink.

I first met Laura and Rian back in Urumqi--they spent a couple years living off-and-on around Xinjiang over the time I was there. The last place Laura and I saw each other must have been Hotan: just before she returned to the U.S. to finish up her Ph.D. Then after Laura went home, Rian and I spent the next immediate weeks together around Kazakhstan and Uzbekistan. That journey was combined research-trip and visa-run for Rian, beginning of the overland journey west from China for me. Now, the three of us have once again regrouped in the same city--this time, New Orleans. I've come down for a short weekend to attend their wedding.

Things got going immediately. Not half-an-hour after dropping my bag off in my room the entire party left for our first event: dinner at the Acme Oyster House. I walked along with dozens of other guests back south toward the bus stop I had just come from. This time it was along a more scenic route which cut through the heart of the French Quarter.

I made get-to-know-you conversation as best I could. Excepting Rian and Laura, there were only a couple people I had previously met. (Really, how many folks were likely to have made the journey out to Urumqi?) I found myself quickly stereotyping a profile of just who had come to attend Laura and Rian's wedding: Late 20s+. Finishing up a doctorate in Cambridge, Ithaca, or Princeton. Hoping to find some way to move to Manhattan post-graduation.

After oysters and drinks, that first evening was spent in fluid blocs going about the activities tourists typically go about while in New Orleans: Strolling around the Moonwalk along the banks of the Mississippi River. Catching strings of beads strewn from floats--these from a parade ostensibly recognizing St. Patrick's Day. Flitting up-and-down Bourbon Street, publicly drinking cheap alcohol from open containers. Then, after regrouping at Laffitte's, a spur over to Frenchmen Street. Some went dancing, some took in the jazz clubs--everybody kept on drinking. I spent the rest of the night over mojitos with newly-met company. Officiant-to-be Matthias, his wife Seda, and I stayed out conversing well-past midnight at a cafe on the corner of Frenchmen and Royal--finally blotting all the alcohol up with tostadas from a Honduran taco truck.

Saturday was the actual wedding date. Plans for guests to arrive en masse at Audubon Park via streetcar were foiled by another St. Patrick's Day parade. Cabs were called.

I was flattered to be not just invited to Laura and Rian's wedding, but also to be asked to participate in the ceremony. A couple weeks prior Laura sent me e-mail asking if I wouldn't recite a poem. No problem--I agreed immediately. This recitation was the third time in the past year I got up to address a crowd. When she asked I figured it would be easy, getting up on a mic must get smoother with experience.

However, arriving at Audubon Park I felt pangs of apprehension. The first speech I made last year was also at another wedding: Michael and Minh Chau's. But that was a toast--words I had rehearsed but didn't have to memorize or deliver just-so. Ad-libbing felt more normal; a poetry recitation wouldn't be quite the same. Then, the last gathering I got up and spoke out at was Grampa's funeral. That was with familiar family on hand and each of us particpated in the eulogy. I suppose that I did recite a poem for that event as well... but it was (by Grampa's behest) in Persian. Certainly, nobody on hand would notice if I misspoke a line here or there. And I doubt there were any camcorders recording that reading for posterity.

At Laura and Rian's wedding I wasn't the only reader, but the first. I got up before gathered friends and family gave it my best:

I truly had no idea how it came out until the ceremony was over and the crawfish boil began. Comments were diverse, but all postive: "That was such a long, beautiful poem. How long did it take you to memorize it?" Simpler: "You were great!". The one I most appreciated: "Your reading was my favorite part of that entire ceremony." 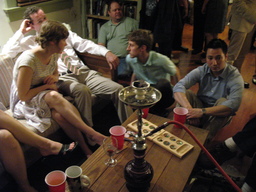 I traded my tie for a bib and set into a meal of Cajun food. Shucking tiny crawfish for what meat was inside seemed more work than it was worth... but I couldn't stop. A brass band got people moving; I was secretly happy there wasn't much dancing--and none of the formal partner ballroom dances I prepared myself for with dance class back in Seattle. A parade of all the wedding guests followed the band, trooping through the mud to the bandstand then back again to the picnic shelter. A bit more dancing, a lot of cheesecake... then off to the final party.

I brought my new hookah down for the weekend and set it up for the final hurrah. I find that a hookah somehow lends itself to socialization and conversation, even when the people seated around it choose not to smoke. The last moments in New Orleans proved no exception to the rule of chill with hookahs: there's always somebody who tries it for the first time who then pronounces that they must go out and buy one for themselves the very next day.

Laura and Rian, thank you for including me in your special day. I can only imagine where we will next cross paths. Congratulations and best wishes!