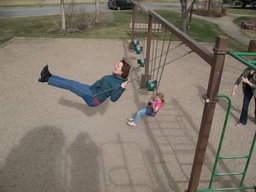 We first found a converted shed adjacent to the instructor's house. There was no door to swing open or slide out of the way, but rather a small, square panel. We placed it aside, crawled in through the hole in the wall it covered, then set it back into place behind us.

I had presumed that a Japanese tea ceremony would comprise little more than a few old ladies sitting cross-legged on tatami mats, sipping fancy brews, gossiping in some formal version of Japanese. I had guessed there would likely be some prescribed order as to when certain snacks or a particular tea might be presented. But, I grossly underestimated the degree of exacting ritual that defines Japanese tea ceremony.

I did find welcoming conversation over varieties of tea. But the ceremony was far more about going through ordained motion and actions than about polite chit-chat. Hefting a ladle just-so. The precise angle at which a spoon must be laid. Correct placement of hands around a cup. The order in which attendees must be presented tea. The phrases spoken in formal Japanese upon being offered sweets or when passing a teacup. Everything was circumscribed in a way that re-defined "ritual" to me.

I did enjoy having a fresh experience and my first opportunity in many years to try to speak some Japanese. But, as we staggered away from the teahouse I confessed to Cloe, the friend who had invited me along to tea, that the same session she found peaceful and relaxing I found alien and unfamiliar. The discomfort I felt wasn't solely from sitting cross-legged for hours.

I tried an analogy: recent occasions I've attended Mass feel soothing to me. I'm not religious: there has to be a significant reason to bring me inside a church. But, Catholic ritual was ingrained every Sunday over so many years of my childhood. Today, it doesn't matter whether a service is conducted in English or even in some language (such as Spanish) that I can't really understand. I know the formula; I know what's coming next.

I'm sure that if I were to attend Japanese tea ceremonies regularly, as Cloe does, I would gradually assimilate a sense of what comes next, which words to say at what times, and when something feels out-of-place. Eventually, the ritual would become something I would find comforting, perhaps even look forward to every week. But, I'll leave that to Cloe: it's her one weekly indulgence. One session attending a tea ceremony felt like enough for me.

I've been spending this second half of my weeklong Colorado visit in Denver, catching up with Cloe. She and I may not go back quite as far as Erin and I go back. Still, it has been nearly 20 years we've been acquainted. We initially met at the start of our senior year of university--when we happened to move into rooms across the hall from one another in a rooming house off-campus. Among many memories I have that could date how long ago that was: I recall one afternoon when Cloe asked to borrow a cassette to play in her Walkman while going out for a run; I lent her a tape of the new Nirvana album. 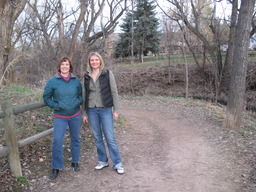 In the convoluted manner I maintain friendships, the next place we met after graduation was not again in Seattle--but in Japan, over a period while we were both working in that country. Now, we're meeting up once again here in Colorado. Somehow, distance is no object in keeping up with friends.

Aside from inviting me to her weekly tea ceremony, Cloe has been playing tour guide in other areas around town. We spent my first full day here getting a sense of Denver on foot. From Cloe's apartment in the south side of the city we walked up through downtown, then east on Colfax Avenue. Our nominal destination was the Tattered Cover, Denver's affectionately seasoned bookstore. We returned by a route cutting across Cheeseman Park, just before a perfect sunset.

As with anywhere on my first visit, I am curious to get to know this town. However, my experience here is less discovering Denver and more the setting in which I'm re-visiting with old friends. I was disappointed to not be able to reserve tickets (even booking weeks in advance) to the one attraction I thought I might like to visit before arriving in Denver: the U.S. Mint. But, I wasn't all-that disappointed... I'm making this trip mainly to see people I know.

Most of our time has been spent catching up over food: mimosa brunch one afternoon on the corner of 1st and Broadway, Lebanese meza one evening off of Downing and Alameda. Cloe lives across the street from a Creole cafe, Lucile's, where I had beignets and cafe au lait for the first time outside of New Orleans. Oh, that confectioners sugar and coffee was good! I may not have a strong sense of Denver yet, but surely can't complain about the cuisine I've found on offer around town.

I introduced Cloe and Erin to each other on an excursion into Boulder yesterday. It was a short but great time. We started at a playground near Erin's apartment; I asked her to bring a Frisbee. We ran around on the grass tossing the disc around until we were all worn out. Sitting in the field, Erin demonstrated the basics of Feldenkrais to Cloe. I laughed as they rolled around, freshly-mown grass clinging to Cloe's sweater.

After a short hike through nearby woods, we had time just enough for dinner at a nearby Salvadorean restaurant. Even knowing both of them for so many years I was surprised by the similarities coming up over the course of their conversation: they share common religious outlook, both moved abroad from Seattle, both settled in Colorado a few years ago.

I think I need to make another trip back here. The places I've seen on this visit seem worth getting to know more fully. I have two good friends--who are additionally acquainted with each other, now--to explore with.

I can't decide if the small circles I run in are melding together, ballooning up, or winding more tightly.