Ahh... I'm back in a comfortable place, staying in one of my favorite corners of the planet. The Blue Mosque is a four-minute walk uphill. Balconys overlook the Küçuk Hagia Sophia Mosque and the Sea of Marmara: the mouth where the waters dividing the Asian and European sides of this city flow. I'm staying in a cozy, familiar home lined with carpets and curios from around the globe. I'm back at Deidre's.

Deidre and I met a few years ago while traveling in Uzbekistan, on the train from Samarkand to Bukhara. We got along immediately, in no small part because I would love to carry on my life in the manner she has. Upon retirement, Deidre left Australia to run around exploring the world. Taken with Istanbul, she bought a house in the heart of the city: the historic quarter of Sultanahmet. This was back when the Turkish currency was weak and few people were investing in the country. 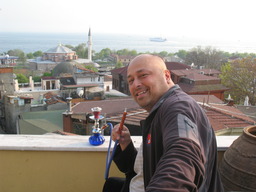 Over a decade later, not only is she still here living in Istanbul but she has no plans to move on anywhere else. We've taken the past couple days catching each other up on what's been happening in our lives since I was here last, in early 2008. She seems to have been doing well over the intervening years. Deidre returned to Istanbul just two days ago from Australia--an Easter visit with grandchildren. A few months back, she made a trip around Ethiopia. Hearing her relate the places she visited and the experiences she had throughout that country is getting me curious about visiting someday, myself. (Harar, a city I'd never heard of, sounds like somewhere I ought to see.)

I'll be staying here at Deidre's for a week before continuing along west into Europe.

Walking down Istiklal and other streets throughout this city, I've been thinking often about Penny: the other friend I stayed with the last time I came through Istanbul. Penny is no longer here; she moved along years ago. Not long after hosting me here she began a new job in Seoul; we managed to connect there as well. However, after that position ended she took another job on yet another continent, this time in Libya. We were talking about meeting up there, as well. She was nearly finished with her first year of work there when the rebellion that country is presently undergoing broke out. I haven't heard anything from Penny, since.

I sometimes wonder if she's okay. My assumption is that she's long-since been evacuated and is doing fine elsewhere. I would have heard news of any westerners who were casualties of the revolution, wouldn't I? I suspect it's my stubborn resistance to joining Facebook more than anything that has kept me from hearing news of how she's been.

I do realize it would be far easier to keep abreast of what everybody I know is up to if I just signed myself up and info came in automatically through social-network feeds. But... I'm trying to maintain the old channels of communication. These days, receiving even an e-mail message, let-alone one written to only me, is rare. I'm the last person I know who still writes postcards.

There's some aspect of communication I find so much nicer when it's one-to-one. I enjoy it so much more when I hear somebody's news for the first time in a direct manner, even if it's a personally written e-mail message, rather than via a mass tweet or status update. I suppose Deidre's and my being able to catch each other up on the little details of our lives in-person over these past couple days has been a luxury. It's felt like we've truly been having conversations with one another, rather than just checking in.